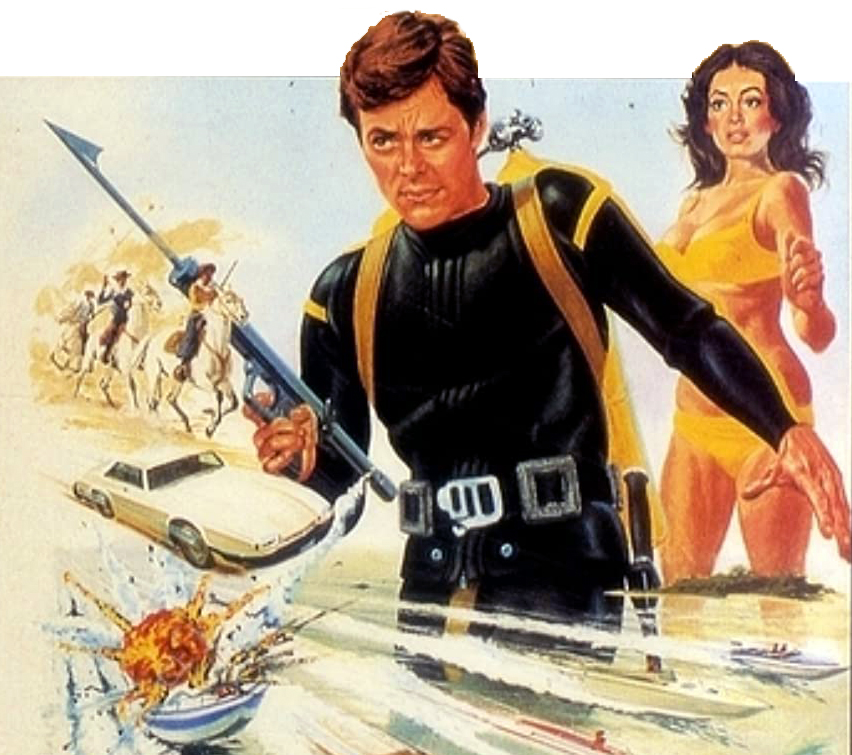 THE SAINT AND THE BRAVE GOOSE (1979, UK, 94m, PG) **½
Action, Crime, Mystery
pr co. ITC Entertainment; d. Cyril Frankel; w. John Kruse (based on the character created by Leslie Charteris); exec pr. Robert S. Baker; ph. Frank Watts (Colour | 1.33:1); m. John Scott; ed. Bert Rule; pd. John Stoll.
cast: Ian Ogilvy (Simon Templar), Gayle Hunnicutt (Annabel West), Stratford Johns (George Duchamps), Derren Nesbitt (Insp. Lebec), Joe Lynch (Capt. Finnigan), Michelle Newell (Genevieve), Edward Brayshaw (Oscar West), Peggy Thorpe-Bates (Mrs. Cloonan), John Hallam (Bernadotti), Leon Lissek (Pancho), Michael Robbins (Beeky), Prentis Hancock (Vic), Wensley Pithey (Franklyn), Cyril Luckham (Coroner).
Originally broadcast as “Collision Course” a two-part episode of Return of the Saint (1978-9), this was compiled into a feature film for the home video market as well as receiving a limited theatrical release. Hunnicutt’s husband is killed when his power boat blows up during a race and sets off for the French Riviera to collect ‘The Brave Goose’, a luxury yacht he has left her. She is followed by associates of her husband, who believe she knows the whereabouts of the spoils of a gold bullion robbery, whilst the Saint (Ogilvy) is also on her trail. Although shot on location in France, the film struggles to escape the limitations of its TV budget and whilst the story is passable it rarely catches fire. Ogilvy lacks the charisma Roger Moore brought to the role a decade earlier and Frankel’s direction is a little flat. Some good underwater footage during the finale adds much-needed suspense to an otherwise overly familiar tale.