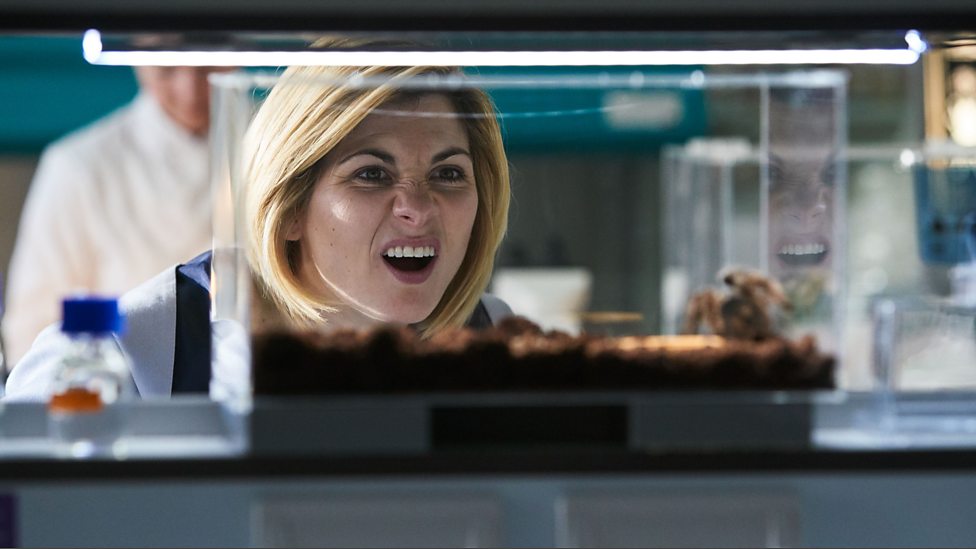 Doctor Who: Arachnids in the UK (TV) (2018; UK; Colour; 50m) ***  pr. Alex Mercer; d. Sallie Aprahamian; w. Chris Chibnall; ph. Tico Poulakakis; m.Segun Akinola.  Cast: Jodie Whittaker, Bradley Walsh, Tosin Cole, Mandip Gill, Chris Noth, Shobna Gulati, Tanya Fear, Ravin J Ganatra, Bhavnisha Parmar, Jaleh Alp, William Meredith, Sharon D Clarke. The Doctor, Yaz, Graham and Ryan find their way back to Yorkshire – and Yaz’s family – only to find something is stirring amidst the eight-legged arachnid population of Sheffield. This episode is an ecological sci-fi/horror tale, which plays to the fears of arachnophobes by introducing us to toxically mutated spiders running amok. Some effective scares and jump moments are offset by a script with some unfilled holes and a performance from Noth as a Trump-like political figure that is over-the-top in the extreme. The TARDIS crew are developing nicely, however, and Walsh continues to bring warmth to his bereaved character. Whittaker is finding her feet well and overcomes some of the script’s weak dialogue with the force of her personality. The spiders are brilliantly realised by the effects team. An abrupt conclusion, which fails to explain satisfactorily how the spider threat to the city is overcome on a broader scale means this episode can at best be seen as entertaining but is undeniably dramatically flawed by overplaying its comedic elements. [PG]