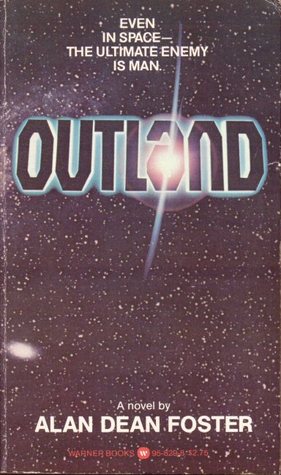 Blurb: Here on Io — moon of Jupiter, hell in space — men mine ore to satisfy the needs of Earth. They are hard men, loners for whom the Company provides the necessities: beds, food, drink and women for hire. Now, in apparent suicide or in frenzied madness, the men are dying… To OUTLAND comes the new U.S. Marshal O’Neil, a man with a sense of duty so strong it drives him to ferret out evil, greed and murder regardless of the cost. If he must, he will forfeit love, livelihood — even life itself.

OUTLAND was effectively a Space Western movie written and directed by Peter Hyams that riffed on the plot of the classic Western HIGH NOON. The movie starred Sean Connery as the Marshal left to fight alone against a corrupt mine manager and the hitmen sent to kill him on a remote moon of Jupiter. Alan Dean Foster is an old hand at novelisations and he adapts Hyams’ screenplay very professionally, bringing additional depth to the main characters and pacing the narrative well. O’Neil’s inner-torment and outer-determination to be seen to do the right thing in tackling the drug smuggling operation despite the personal sacrifices he makes are the heart of the story and Foster balances this well with the unfolding plot. The interplay between O’Neil and his only real ally – a cynical female doctor – is enjoyable. A decent, if less than original, film gets a decent novelisation.