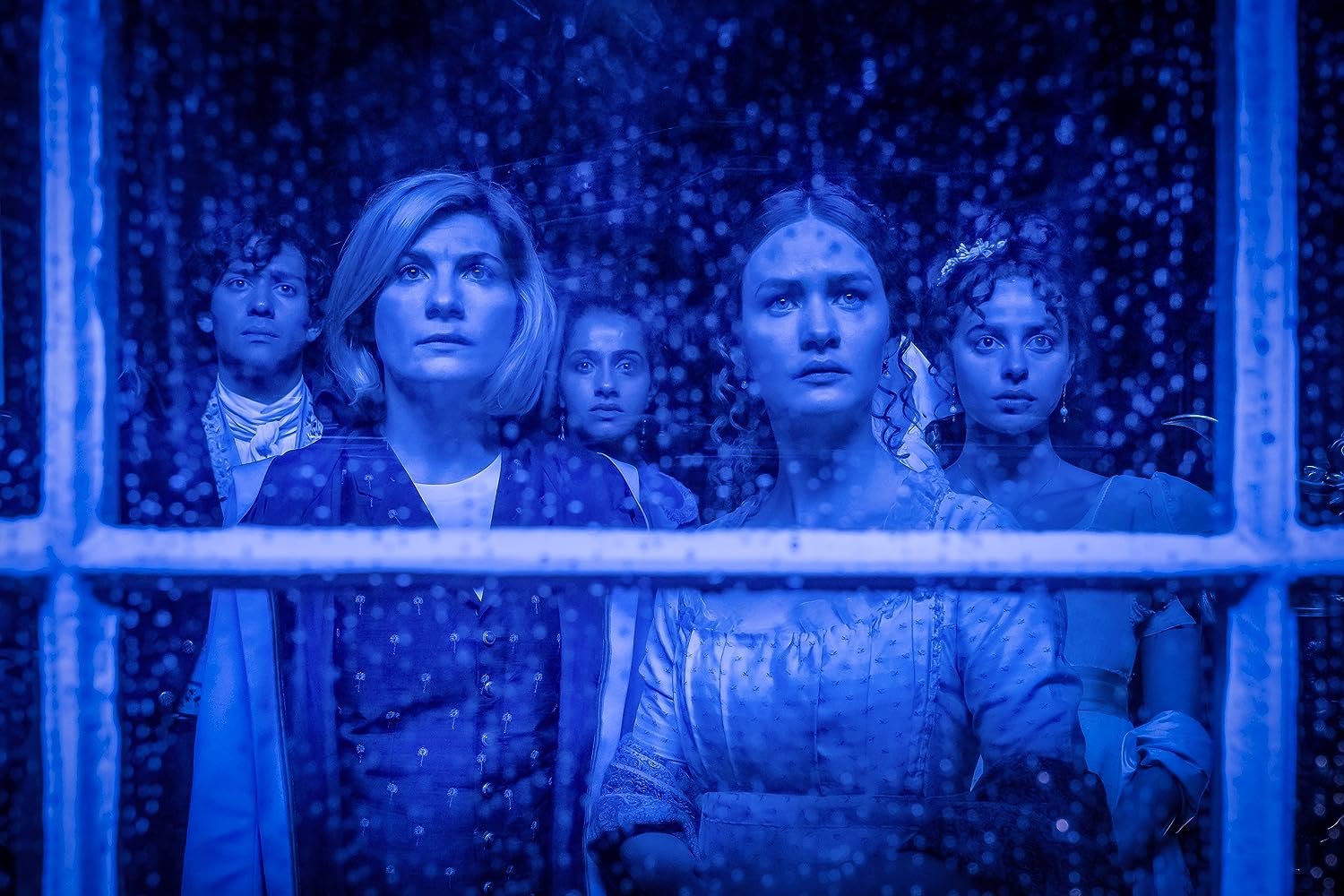 DOCTOR WHO: THE HAUNTING OF VILLA DIODATI (UK, 2020) ***
Distributor: British Broadcasting Corporation (BBC); Production Company: BBC Studios; Release Date: 16 February 2020; Running Time: 49m; Colour: Colour; Sound Mix: Dolby Digital; Film Format: HD; Aspect Ratio: 2.00:1; BBFC Cert: PG.
Director: Emma Sullivan; Writer: Maxine Alderton, Chris Chibnall; Producer: Nikki Wilson, Alex Mercer; Executive Producer: Chris Chibnall, Matt Strevens; Director of Photography: Ed Moore; Music Composer: Segun Akinola; Film Editor: Agnieszka Liggett, Joe Skinner; Production Designer: Dafydd Shurmer; Casting: Andy Pryor; Costumes: Ray Holman; Make-up: Claire Pritchard-Jones; Sound: Harry Barnes; Special Effects: REAL SFX; Visual Effects Producer: Pete Levy (DNEG).
Cast: Jodie Whittaker (The Doctor), Bradley Walsh (Graham O’Brian), Tosin Cole (Ryan Sinclair), Mandip Gill (Yasmin Khan), Lili Miller (Mary Wollstonecraft Godwin), Nadia Parkes (Claire Clairmont), Jacob Collins-Levy (Lord Byron), Maxim Baldry (Doctor John Pollidori), Patrick O’Kane (Ashad), Lewis Rayner (Percy Bysshe Shelley), Sarah Perles (Elise), Stefan Bednarczyk (Fletcher), Nicholas Briggs (Cyberman Voice).
Synopsis: The Doctor and gang arrive at the Villa Dioscidati, Lake Geneva, in 1816 – on a night that inspired Mary Shelley’s Frankenstein. The plan is to spend the evening soaking up the atmos in the presence of some literary greats – but the ghosts are all too real. And the Doctor is forced into a decision of earth-shattering proportions…
Comment: Another episode that has a lot right with it but still manages to frustrate. The story has a great setting in an old house at Lake Geneva and the premise is obviously geared toward events inspiring Mary Wolstencrof to create the vision for her novel Frankenstein. The house is suitably spooky, populated with quirky characters and some chilling surprises. But yet again there is too little time to cover all the ideas on show and the narrative appears muddled as a result. There are still too many companions to fully justify themselves Cole’s acting has been wooden at best and here he gives possibly his worst performance delivering lines with little conviction or flair for humour. The shoe-horning in of the Cyberman threat – which we could all see coming following pre-empts earlier in the series – raises more questions than are answered here. The closing two-parter will hopefully square these off. Whittaker has the occasional strong moment, whenever she is given more to do than just dial-up the quirky scale beyond Tennant levels. She is very good in the scene close to the finale where she debates the actions she should take with her friends.  The series is running out of time to hit the heights we have come to expect but hopefully, the season finale will deliver.