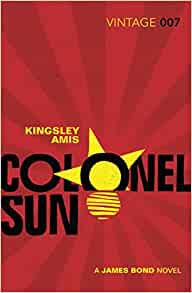 Blurb: Lunch at Scott’s, a quiet game of golf, a routine social call on his chief M, convalescing in his Regency house in Berkshire – the life of secret agent James Bond has begun to fall into a pattern that threatens complacency … until the sunny afternoon when M is kidnapped and his house staff savagely murdered. The action ricochets across the globe to a volcanic Greek island where the glacial, malign Colonel Sun Liang-tan of the People’s Liberation Army of China collaborates with an ex-nazi atrocity expert in a world-menacing conspiracy. Stripped of all professional aids, Bond faces unarmed the monstrous devices of Colonel Sun in a test that brings him to the verge of his physical endurance.
Comment: This is the first continuation James Bond novel commissioned by Ian Fleming’s estate. Amis, a respected author in his own right (Lucky Jim, The Green Man, etc.), was a friend of Fleming’s and a fan of the series. He had written two books about the series – The James Bond Dossier and The Book of Bond, or Every Man His Own 007 (using the pseudonym of M’s chief-of-staff, Lt-Col William (‘Bill’) Tanner). He was therefore a logical choice to continue the series. The book is very well written and provides a scenario which tests Bond to his physical limits. The torture scene in the book’s final act is more sadistic and unpleasant than anything Fleming conjured up. The Greek setting gives the tale a fresh feel too, but somehow lacks Fleming’s sense of place. The plot is simple in that M is kidnapped by the Chinese psychotic, Colonel Sun Liang-tan, who is supported by a former Nazi in a scheme to unsettle the international community by obliterating a Russian conference and leaving the bodies of M and Bond as framed culprits. Bond works with the Russians, in the form of female agent Ariadne Alexandrou with whom he becomes romantically involved, to track down Sun’s lair and rescue M. The action scenes are well-staged and Amis remains true to Fleming’s format and characterisations. Amis has Bond rely on his resilience and physical strength, rather than gimmicks, to overcome the odds. There is little in the way of back-reference to the events in the Fleming novels, so the story holds up well as a standalone. Ultimately, it makes for a solid thriller that would have sat within the mid-range of Fleming’s series.