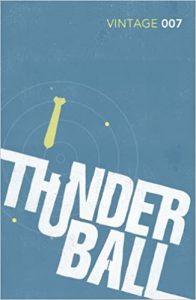 Blurb: ‘He was one of those men – one meets perhaps only two or three in a lifetime – who seem almost to suck the eyes out of your head. He was their Supreme Commander – almost their god’ SPECTRE is a merciless new enemy – a group of the world’s toughest criminals, headed by the brilliant Ernst Stavro Blofeld. When two NATO atom bombs go missing, Bond must unravel SPECTRE’s intricate plans and prevent a global catastrophe.
Comment: Fleming’s ninth James Bond novel is unique in that it is based on an original screenplay Fleming had developed with Kevin McClory, Jack Whittingham, Ivar Bryce and Ernest Cuneo. It became the subject of a long, drawn-out legal battle when Fleming’s novel appeared without any acknowledgement of the contribution of the others involved. The result was a court ruling that gave story credit to the three main writers, which meant all future publications of the novel carried the following credit: “This story is based on a film treatment by K. McClory, J. Whittingham and Ian Fleming.” McClory would also retain film rights to the subject matter following Fleming’s death in 1964, which resulted in a deal with Eon productions to film the novel for release in 1965 (originally planned as the first Bond movie but held up by the legal wrangle). The legal battle between Eon and McClory re-emerged in the 1970s with McClory claiming copyright ownership of SPECTRE and the character of Ernst Stavro Blofeld, both introduced in Thunderball. This resulted in McClory’s ill-received remake, Never Say Never Again, in 1983 row which Sean Connery was lured back for one last bow as 007.
Fleming’s novel, meanwhile, is an excellent spy adventure coasting on all the elements that made the series popular. Whilst his use of coincidence (the Shrublands meeting with Count Lippe and his bumping into Domino in the Bahamas) as a story advancement technique, may be questionable, it ensures the plot moves quickly. The Bahamas setting is exotic and the characters are strong. Emilio Largo has a conceit that proves to be his undoing, when he brings his mistress – the feisty Domino Vitali – with him on atomic bomb salvage and extortion operation. The introduction of SPECTRE, a criminal super-organisation, and its leader Blofeld creates an added threat and a chief villain with gravitas and charisma who would return in two further novels. The underwater fight climax is thrillingly written and exciting. The story does seem to wrap up remarkably quickly after this and leaves the reader with a feeling of a lack of closure, with Blofeld and SPECTRE remaining at large, but that was understandable given the options this would give Fleming moving forward. In summary, whilst not quite the peak of Bond’s literary adventures, Thunderball is still enjoyable escapism and an important watershed in the series.