Henry VIII (James) has just married Marie of Normandy (Sims) and is eager to consummate their marriage. Unfortunately for Henry, she is always eating garlic, and refuses to stop. Deciding to get rid of her in his usual manner, Henry has to find some way of doing it without provoking war with Marie’s cousin, the King of France (Gilmore). The perfect casting of James as Henry VIII and a script that has some genuinely funny one-liners alongside the usual double-entendres makes this historical farce is one of the best of the series. Sims, as Henry’s the garlic eating French wife, and Williams, as Cromwell, offer excellent support. Hawtrey also gives one of his most memorable turns as the king’s taster. Good production values through use of wardrobe from ANNE OF THE THOUSAND DAYS. 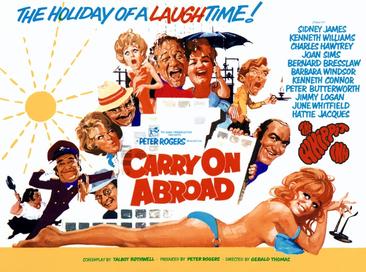 A group of holiday-makers head for the Spanish resort of Elsbels for a 4-day visit. When they get there, they find the Hotel still hasn’t been finished being built, and the weather is awful. And there is something strange about the staff. They all look very similar. To top it all off, the weather seems to be having an adverse affect on the Hotel’s foundations. The usual array of smutty jokes and slapstick humour is trotted out as the crew embark on a disastrous packaged holiday. Strong points are James’ permanent cheerfulness and Jacques’ temperamental Spanish hotel chef. Entertaining if it catches you in the right mood, but not up with the series’ best. The last film in the series to feature regular Hawtrey.