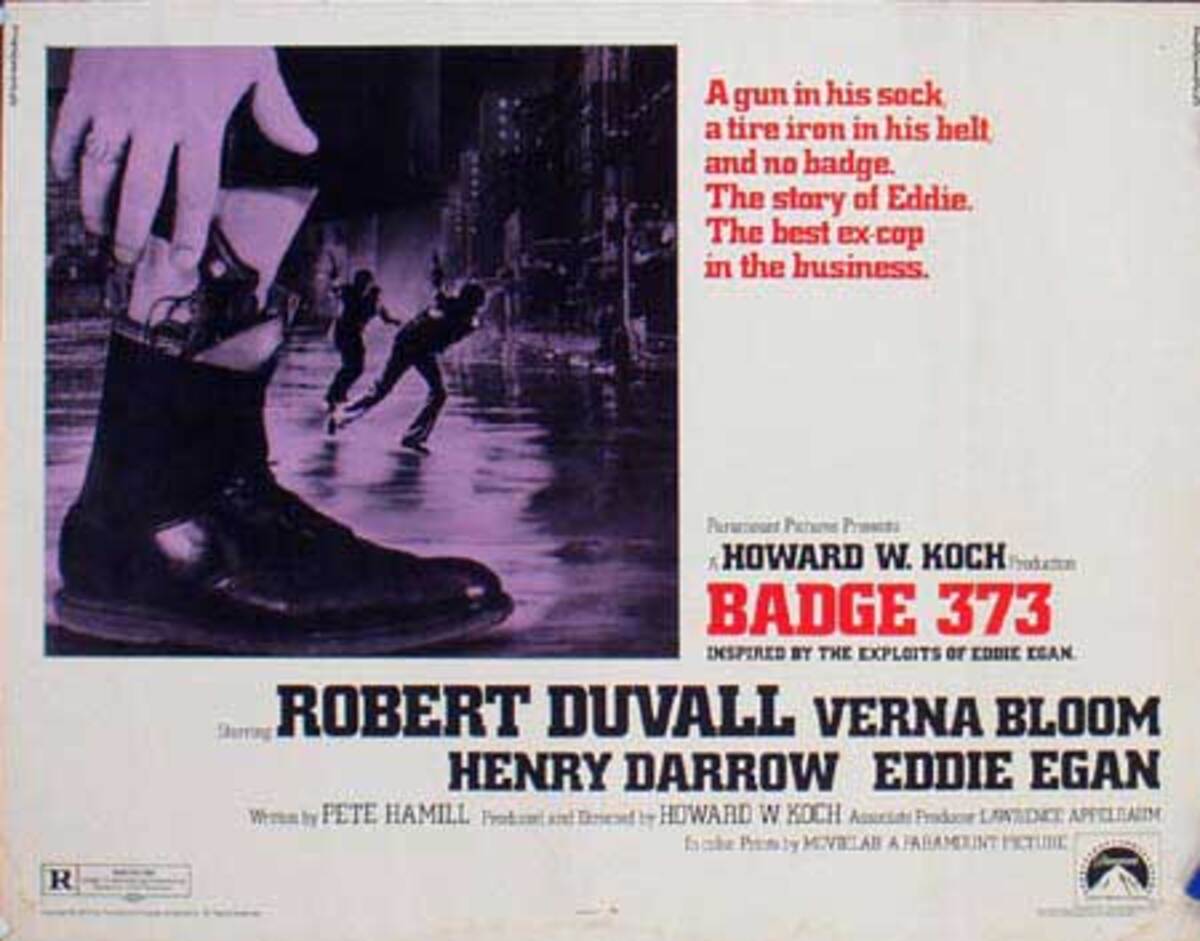 BADGE 373 (1973, USA) **½
Crime, Drama, Thriller
dist. Paramount Pictures (USA), Cinema International Corporation (CIC) (UK); pr co. Paramount Pictures; d. Howard W. Koch; w. Pete Hamill (inspired by the exploits of Eddie Egan); pr. Howard W. Koch; ph. Arthur J. Ornitz (Technicolor. 35mm. Spherical. 1.85:1); m. J.J. Jackson; ed. John Woodcock; ad. Philip Rosenberg; rel. 25 July 1973 (USA), 9 August 1973 (UK); BBFC cert: 15; r/t. 116m.
cast: Robert Duvall (Eddie Ryan), Verna Bloom (Maureen), Henry Darrow (Sweet William), Eddie Egan (Scanlon), Felipe Luciano (Ruben Garcia), Tina Cristiani (Mrs. Caputo), Marina Durell (Rita Garcia), Chico Martínez (Frankie Diaz), Jose Duvall (Ferrer (as Jose Duval)), Louis Cosentino (GiGi Caputo), Luis Avalos (Chico), Nubia Olivero (Mrs. Diaz), Sam Schacht (Assistant D.A.), Edward F. Carey (The Commissioner), ‘Big’ Lee (Junkie in Casino), Duane Morris (Gay in Casino), John Marriott (Superintendent), Joel Veiga (Manuel – Botica Proprietor), Mark Tendler (Harbour Lights Bouncer), Robert Weil (Hans).
When his partner is killed, tough Irish detective Eddie Ryan (Duvall) vows to avenge the death, whatever the cost. As he begins unravelling clues, his behaviour becomes so outrageous that he’s obliged to turn in his badge, but the experience only emboldens him. Ryan eventually learns that his partner was caught up in a Puerto Rican gun-running scheme masterminded by a crook named Sweet Willie (Darrow), who wants to foment revolutionary war. Billed as being based on the exploits of real-life NYPD cop Eddie Egan, this production follows on the coattails of the vastly superior 1971 landmark, THE FRENCH CONNECTION, which had also been based on one of Egan’s cases. This time Duvall takes on the cop role and does a creditable job. However, the film lacks the directorial style and the building of tension that made THE FRENCH CONNECTION a winner. Here we have a cop seeking revenge and, after he is suspended, going it alone. Good use is made of New York locations in Brooklyn and Manhattan adding an authenticity that is lacking elsewhere. The script lacks dramatic punch and the gun-running sub-plot feels formulaic, with the Puerto Rican villains decidedly stereotypical. Egan has a significant role as Duvall’s boss, but his lack of acting experience shows, whilst Darrow lacks the charisma required for his role as the arms dealer. The actions scenes, though, are well-staged – notably, a chase involving Duvall on board a bus with the villains in pursuit in a fleet of cars. Despite its flaws, the film remains a moderately entertaining but lesser entry in the rogue cop genre.