(s. 5 ep. 11) A wild white stallion draws the attention of Elizabeth (Lane) who convinces her grandfather (Bickford) to buy it. Against his wishes, she tames and breaks the stallion when Trampas (McClure) is unable to. Her and the stallion become inseparable, but a problem occurs. The standard story of girl falls in love with wild horse and only she can tame him. All the stock story development is used in this tale, but it is done without becoming cloyingly sentimental and Lane delivers a genuinely charming and engaging performance. 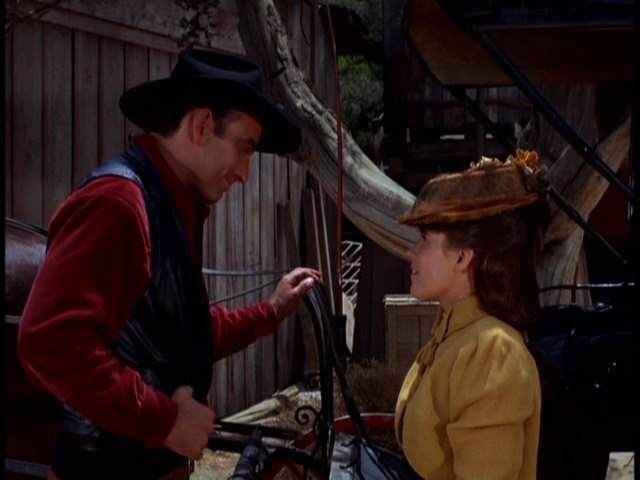 (s. 5 ep. 9) A woman (Vincent) visits her sister in Medicine Bow bringing her teenage daughter (Rawlings) who is enamoured with a Dead Eye Dick western novel. She develops a crush on The Virginian (Drury) after he settles her horse aggravating a teenage boy she meets who likes her. A lightweight and totally predictable episode, the kind that made a diversion from the more serious material around it. The big positive is Rawlings, who captures the girl’s naive charm well. Everything else in this tale is moderate and instantly forgettable. 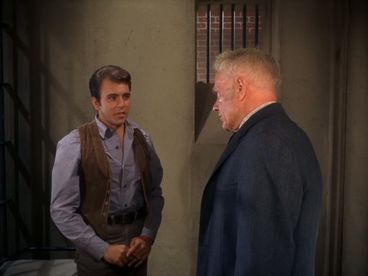 (s. 5 ep. 7) A man (Fabian) wanted for murder and robbery escapes jail and ends up in Medicine Bow where he befriends Stacey (Quine) in a fight. He goes to work at Shiloh as a ranch hand and Elizabeth (Lane) takes an interest in him. However, Stacey is less certain about him. The story progresses at a pretty slow rate with little dramatic impetus until the final act. Former teen idol Fabian makes his third appearance as a guest star in the series and acquits himself fairly in interpreting the ambiguity of his character. Lane is endearing as Elizabeth who falls for Fabian’s charms and tries her best to help him clear his name. 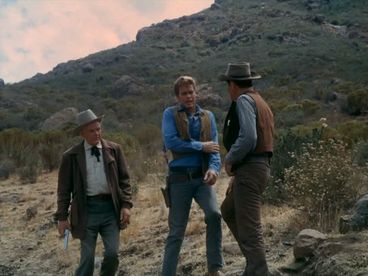 (s. 5 ep. 5) Jake (Ray) who can’t hear or speak runs after he accidentally kills a man in a bar. He lands at Shiloh where his hard work results in a job. Stacey (Quine) seeing Jake can’t express himself decides to teach him to read and write but puts him in danger. Told in flashback, which has little dramatic effect on the story, this is a familiar tale of a misunderstood misfit with a disability and a heart of gold. For the most part, the story avoids dropping too deep into sentimentality, largely through the sympathetic performance of Ray as the deaf-mute on the run from a murder charge. There is a side plot about two ranch hands stealing heads of cattle from the Shiloh stock and their need to keep Ray from informing on them. The story is wrapped up all too neatly and without a resolution to the incident that started it and as such leaves the viewer unfulfilled.

(s. 5 ep. 3) A white girl is caught with her adoptive Arapaho parents stealing Shiloh cattle. She stays at Shiloh while the authorities try to find her white parents. She wants to return to the Arapaho but is forced to learn to live in the white world. The diminutive Strasberg gives a good performance as the adoptive Indian with emotional conflicts splitting her bond with her adoptive Arapho guardians and her natural parents. This is a good episode for Lane whose frustration in her attempts to bond with Strasberg are sensitively played. Good direction from Weis keeps the story the right side of sentimental and the finale is genuinely touching.

(s. 5 ep. 2) The Virginian counted 50 cows that were delivered to Grainger but the next morning five of them are missing. The Virginian feeling responsible tracks the stolen cattle down but finds himself arrested on murder charges and can’t explain it. Drury is at his stoic best in this episode of secrets and blackmail. Dickinson is excellent as the ex-saloon girl trying to make good as Stone’s wife. Best of all is Hamilton as a dignified black sodbuster out to make an honest living for himself and his boys. Russell overplays his spoilt brat role, but that is the only negative aspect of this strong and emotive episode.

(s. 5 ep. 1) The new owner of Shiloh quickly finds his hot-headed grandson accused of cattle rustling. He learns his neighbour is the widow of a friend who died with him. The sullied family name reduces their finance options putting Shiloh in jeopardy. Season five opens with a strong episode built around Bickford and Van Fleet. Lane and Quine are also introduced as Bickford’s devoted granddaughter and volatile grandson and acquit themselves well. The drama is resolved a little too neatly in its final act, but still another example of how the series retained a high quality producing up to 30 episodes a year at 75m each.