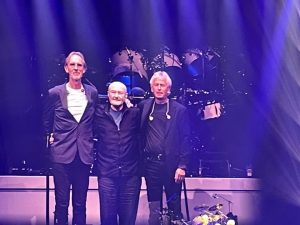 Well they may well all be over 70 now and Phil Collins not in the best of health, but Genesis still turned on the magic last night at the Manchester Arena. A delay of over an hour due to a generator failure only helped to add to the anticipation (maybe the puncture they had on the way up from Birmingham should have been a warning). The Mexican Wave even played its part in keeping the audience happy whilst the technical issue was addressed. There is a sense of finality about this tour and there was a distinct ambience of warmth, nostalgia and huge affection around the arena – this was at its height with the stirring performances of Afterglow and I Know What I Like which genuinely touched the emotions. The staging was quite simply stunning and the band were in great form musically. Yes, Phil’s vocals are not what they were in his heyday, but he found new ways to compensate and the addition of backing singers Patrick Smyth and Daniel Pearce helped considerably. A special word for Nic Collins, Phil’s son, on drums. You could see Phil’s pride as he watched Nic tackle the drum parts Phil himself had written, whilst adding his own muscular character. Phil was in excellent humour and there was good banter with the audience and Mike, Tony and Daryl along with Nic provided some really powerful musical moments. If, as I strongly suspect, this is the last time I see my favourite band then they are certainly going out on a high.
Tony Banks – Keyboards
Phil Collins – Lead Vocals, Tambourine
Mike Rutherford – Guitar, Bass
with:
Daryl Stuermer – Guitar, Bass
Nic Collins – Drums
Daniel Pearce – Backing Vocals, Percussion
Patrick Smyth – Backing Vocals
setlist:
Duke’s Intro
Turn It On Again
Mama
Land of Confusion
Home by the Sea/Second Home by the Sea
Fading Lights/The Cinema Show/Afterglow
That’s All (acoustic)
The Lamb Lies Down on Broadway (new arrangement)
Follow You Follow Me (acoustic)
Duchess
No Son of Mine
Firth of Fifth (instrumental)
I Know What I Like (In Your Wardrobe)
Domino
Throwing It All Away
Tonight, Tonight, Tonight
Invisible Touch
Encore:
I Can’t Dance
Dancing With the Moonlit Knight/The Carpet Crawlers

Photos have emerged this week of Genesis in rehearsal in London for their The Last Domino? tour, due to hit the UK in April 2021. Tony Banks, Phil Collins and Mike Rutherford have been joined by guitarist Daryl Stuermer and Phil’s son Nic on drums. The band was originally to have toured in November and December of this year, but the concerts were postponed due to the Coronavirus. Whilst it is by no means certain the band will be able to fulfil the dates next April, we keep our collective fingers crossed. 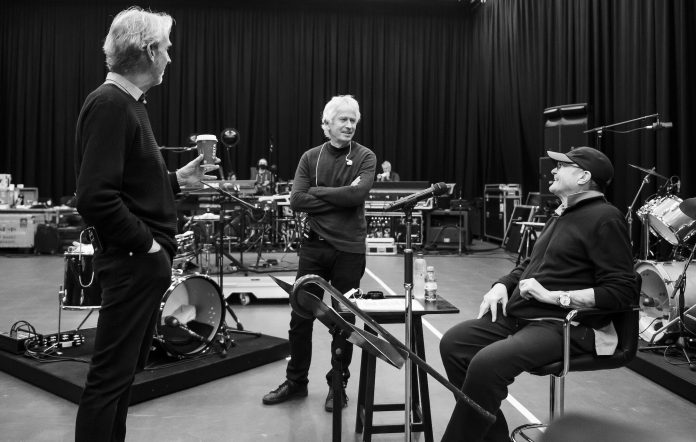 The dates for the tour are: