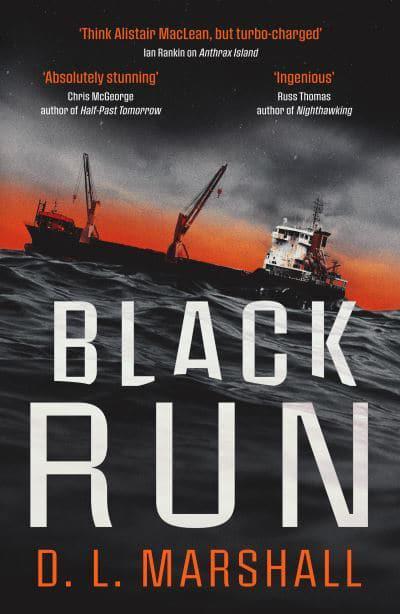 Blurb: John Tyler has a new mission: capture a heavily protected target from the Alps and smuggle him back into the UK in time for Christmas. La Rochelle in the dead of night: Tyler boards the Tiburon, a rusting freighter crewed by smugglers and mercenaries, for the last leg of his journey. But he is short on time. His mark’s security team has pursued him across France, determined to retrieve their boss, and they won’t be deterred by an ocean. The race is on. Tyler heads into the Bay of Biscay in a storm, with a pursuing boat snapping at his heels. But when his prisoner is found murdered inside a sealed hold on the ship, everyone on board becomes a suspect. In the flickering light of the Tiburon’s passageways there’s nowhere to run, but everywhere to hide. Some might think the situation is spiralling out of control, but they don’t know John Tyler…
Comment: D.L. Marshall’s follow-up to his excellent debut novel ANTHRAX ISLAND is a supremely confident action thriller and mystery. The author successfully blends elements of Alistair MacLean adventure with Bond/Bourne spy action and locker-room mystery into a page-turning cocktail that is irresistible. Marshall skillfully unfolds his story by mixing the present with events in the two-week lead-up to Tyler boarding the Tiburon with his human cargo. The action is frequent and bloody but described with self-awareness and frequent nods to popular culture– notably The Beatles, Band Aid. and, like the latest Bond movie, elements of On Her Majesty’s Secret Service. The reader has fun spotting these obvious and not-so-obvious references. There are twists galore and a cliff-hanger conclusion that leaves you wanting more. BLACK RUN shows Marshall to be a writer of immense talent, whilst Tyler is a hero whose human fallibilities make him endearing and less of a superman than others that flood the genre.

Blurb: FACT: In 1942, in growing desperation at the progress of the war and fearing invasion by the Nazis, the UK government approved biological weapons tests on British soil. Their aim: to perfect an anthrax weapon destined for Germany. They succeeded. FACT: Though the attack was never launched, the testing ground, Gruinard Island, was left lethally contaminated. It became known as Anthrax Island. Now government scientists have returned to the island. They become stranded by an equipment failure and so John Tyler is flown in to fix the problem. He quickly discovers there’s more than research going on. When one of the scientists is found impossibly murdered inside a sealed room, Tyler realises he’s trapped with a killer…

Comment: The debut novel of D.L. Marshall mixes the ingredients of an Alistair MacLean adventure with a locked-room mystery,  a James Bond spy caper and the group paranoia of John Carpenter’s The Thing (to which the author adds an overt nod on page 83 ). All great influences and all blend together to create a highly enjoyable page-turning thriller. Marshall’s story is told from a first-person perspective by the hero, mercenary spy John Tyler, who is transported onto the titular island under the guise of a technician to repair a faulty protective door unit. The group of scientists working on the island are testing for remnant samples of experiments undertaken secretly during WWII. The death of Tyler’s supposed predecessor is followed by others and the group quickly become distrustful of Tyler and each other, whilst the discovery of a new strain of the deadly anthrax attracts international interest. Marshall takes us through many twists and turns in his mazy plot and the tension builds as the paranoia amongst the group increases. Marshall’s prose style is fluid and engaging. Tyler as a character feels real and human and has depth along with a personal motivation which unfolds throughout the story. Writing the novel in the first-person Marshall succeeds in elevating the “whodunnit” elements of the plot allowing the reader to unravel the mystery along with the protagonist. Marshall keeps a trick or two up his sleeve right up to the story’s protracted denouement, which veers off into more traditional action movie tropes in the final chapters. That said, this remains a hugely impressive and thoroughly enjoyable read that promises great things for the intended series.