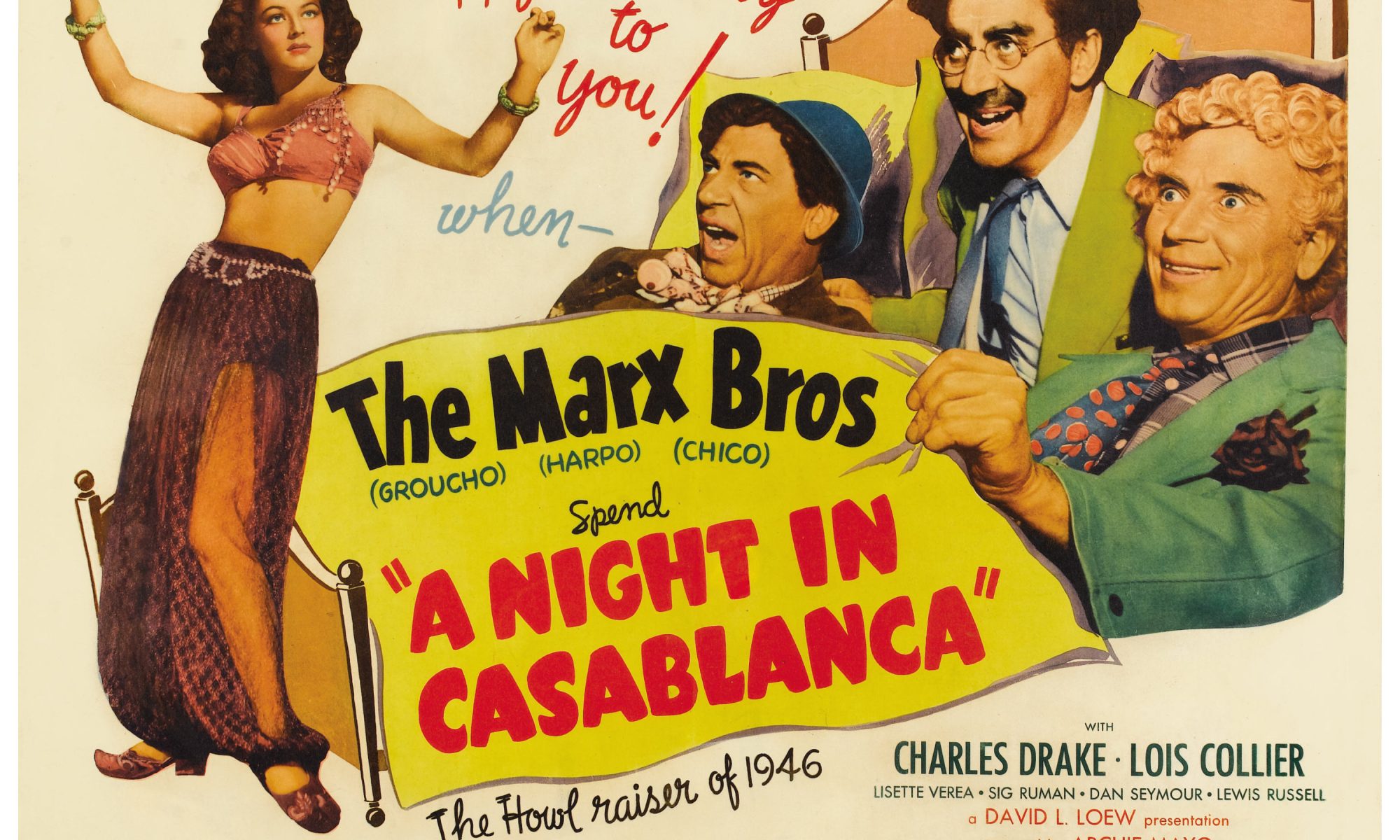 A NIGHT IN CASABLANCA (1946, USA) ****
Comedy
dist. United Artists; pr co. Loma Vista Productions; d. Archie Mayo; w. Joseph Fields, Roland Kibbee; pr. David L. Loew; ph. James Van Trees (B&W. 35mm. Spherical. 1.37:1); m. Werner Janssen; ed. Gregg C. Tallas; pd. Duncan Cramer; rel. 16 May 1946 (USA), 11 July 1946 (UK); BBFC cert: U; r/t. 85m.
cast: Groucho Marx (Kornblow), Harpo Marx (Rusty), Chico Marx (Corbaccio), Charles Drake (Pierre), Lois Collier (Annette), Sig Ruman (Heinrich Stubel / Max Pfferman), Lisette Verea (Bea), Lewis L. Russell (Governor), Dan Seymour (Prefect of Police), Frederick Giermann (Kurt), Harro Meller (Emile), David Hoffman (Spy), Paul Harvey (Mr. Smythe).
Five years after their “billed” final film, THE BIG STORE (1941), the Marx Brothers return in this riff on CASABLANCA (1942). Here, Ronald Kornblow (Groucho) takes over as the manager of a luxurious hotel in Casablanca, in the aftermath of World War II. After discovering that both of his predecessors had been murdered, Kornblow begins to fear for his safety — especially when Nazi Count Pfefferman (Ruman) tries to take over Kornblow’s job in a bid to get his hands on valuable items that were stashed in the hotel by the Nazis at the tail end of the war. Whilst the film runs out of comedic steam as it attempts to wrap up its plot in the finale, much of the rest is top-draw Marx comedy. Groucho delivers his one-liners with leering grace and Harpo provides much of the physical comedy. There are opportunities for musical interludes for Chico (piano) and Harpo (harp) and the plot manages to stay out of the brothers’ way for most of the running time. The result is a return to form and a late-career flourish. The brothers would make one more film together – LOVE HAPPY (1949) before disbanding.