(s. 1 ep. 15) Charlie O’Rourke (Green Bush), a friend of Heyes and Curry (Duel and Murphy) from their outlaw days, is about to be hanged for a robbery which resulted in several deaths. He recognizes Heyes and Curry from his jail-cell window and offers them a map to the gold bars he stole, wanting that to be his “legacy” to them. The boys decline, but others — including Bannerman detective Harry Briscoe (Cannon) — steal the map and head after the gold. In the interests of staying honest and turning the tables on Briscoe, an old foe who might be a friend, the boys start trailing the gold hunters. This episode feels like it has a little too much padding and crossing and double-crossing for its own good. That said, it is always a delight to see Cannon as the snake-like Bannerman man. Hackett also has a lot of charm in her role. The main problem with this episode is that everything feels a little too contrived and neat despite the enthusiastic performances and good levels of humour. 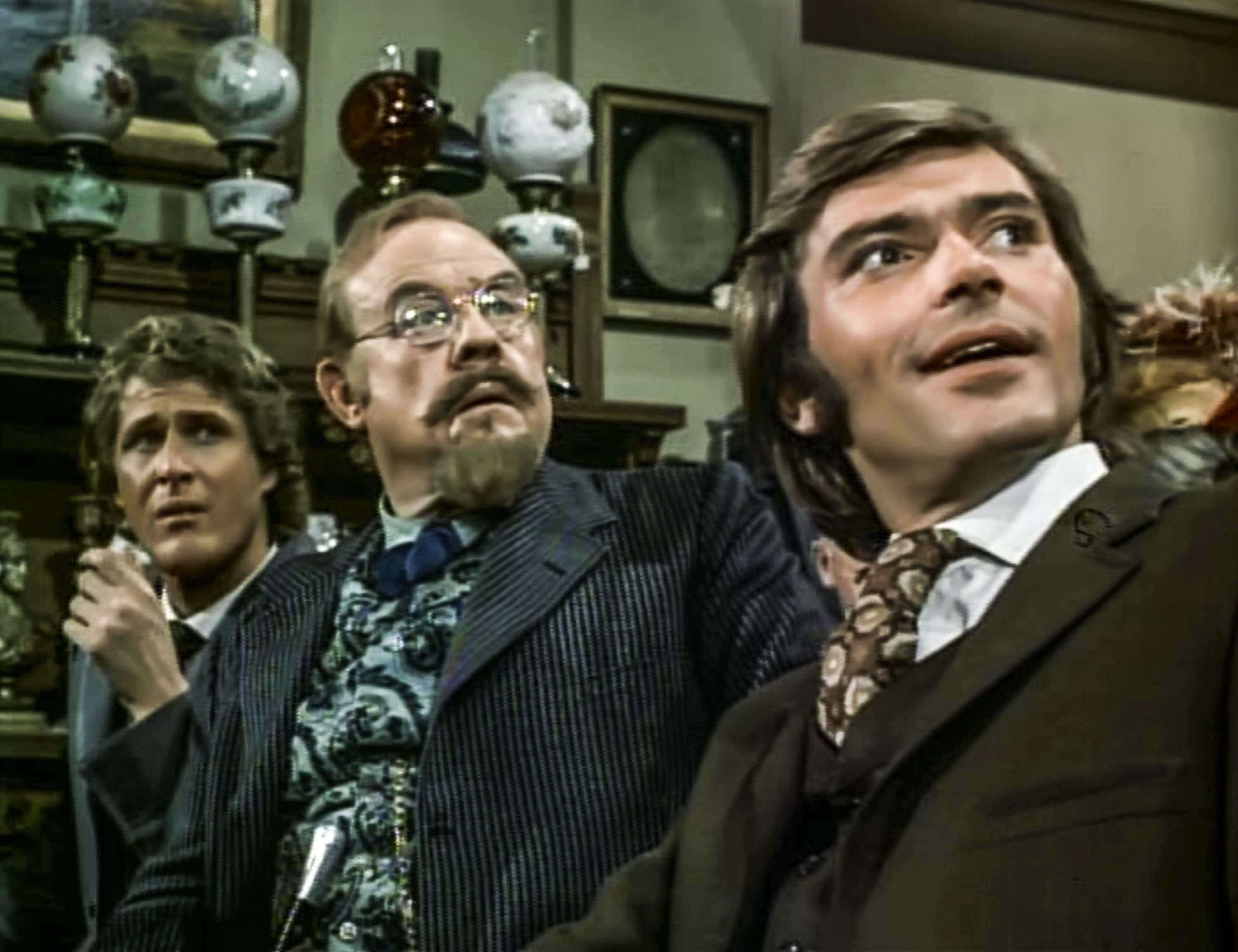 (s. 2 ep. 16) Big Mac’ McCreedy (Ives) hires Smith and Jones (Duel and Murphy) to steal it (again ) – the Cesar’s bust from Armendariz (Romero) but Heyes refuses (but agrees to teach one of McCreedy’s men how to do it  instead.) Heyes and Curry agree to escort the bust from a pre-arranged going spite too San Fransisco, where is to be auctioned. Whilst Heyes and Curry wait at the town near three deep-spot, they meet the town bully (Majors). Though they keep backing down, the bully keeps pushing, and Curry starts losing his temper. This sequel to the previous season’s The McCreedy Bust is a superb example of the easy-going nature of the series, but also with some dramatic tension and philosophical messaging. Duel and Murphy are on top of their game here, bickering as they try to avoid hired gunman Majors whilst seeing through their job for Ives. Dillman offers a sensitive portrayal of a clergyman turning to alcohol through his lack of faith. His interplay with Murphy, notably in the finale is memorable. Majors is all arrogance as the heavy. The final twist leaves the story open.

(s.2 ep. 10) Clementine Hale (Field), a friend of Heyes and Curry (Duel and Murphy) since they grew up together in Kansas, meets the boys in Denver and shows them a group photograph they all posed for not too long ago. The photo is invaluable to lawmen who want to arrest Heyes and Curry, and Clementine waves it at the boys in an attempt to get them to go along with her larcenous scheme. Years earlier, banker Winford Fletcher (Vallee) had stolen $50,000 from the bank where Clementine’s father worked, then framed him for the theft and sent him up the river. The boys ride into Fletcher’s home town and pose as land grabbers, convincing Fletcher to buy up all the land he can get hold of and paying through the nose. This delightful episode has a strong cast and a clever script (playing another “sting” scenario) by Larson and Huggins. Field is quirky and her interaction with Duel and Murphy feels natural and unforced. Vallee is perfect as the greedy property agent, who is the target of Field’s scheme and Ameche has a brief cameo as “Diamond Jim”, another of the series’ larger than life master con-men.