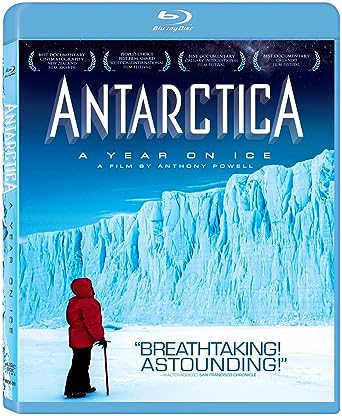 ANTARCTICA: A YEAR ON ICE (2013; New Zealand; Colour; 92m) ****  d. Anthony Powell; w. Anthony Powell; ph. Anthony Powell; m. David Donaldson, Plan 9, Steve Roche, Janet Roddick.  Documentary. A visually stunning chronicle of what it is like to live in Antarctica for a full year, including winters isolated from the rest of the world, and enduring months of darkness in the coldest place on Earth. Powell’s film is a personal document of his ten years working in Antarctica, contrasting life in the summer months, when thousands of scientists descend on the continent to that in the winter (spent at times in total darkness) when only a skeleton staff remain. His use of time-lapse photography creates some stunning images of seasonal change and barren icy landscapes as well as the stunning aurora. Powell expertly captures the reality of life in an unforgiving environment through demonstrating the impacts of extreme weather and isolation through his visuals and interviews with personnel from both McMurdo and Scott bases. An often stunning and honest account of what to many will seem like an alien environment.