BLURB
After a high-profile case puts him in the headlines, private detective John Shaft searches for something low-profile to keep him out of the spotlight and out of danger… and takes a missing person case that proves to be more difficult than he thought. At the same time, he is hired to be a consultant on a low budget film that may or may not be based on his life, and proves to be as dangerous as any job he’s ever had. But when there’s danger about, John Shaft won’t cop out – even if it means squaring off against sadistic gangsters that want him dead. 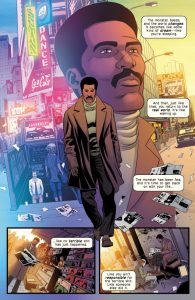 SHAFT QUOTES
“Speaking frankly, most people in this city don’t give a good god-damn about anyone from anywhere.”

BOTTOM LINE
Whilst Shaft: Imitation of Life doesn’t quite match the levels of brilliance of its predecessor, it is still an entertaining ride with aspects of social commentary added to a winning formula. Here’s looking forward to a third series from Walker and co. very soon.

REVIEWS
“Writer David F. Walker oozes the aesthetic of this time period and the visuals from Dietrich Smith and Alex Guimaraes take the reader right back to the era of polyester and shag carpets. Wonderful work.” – Hannibal Tabu, ComicBookResources.com

“Walker’s ability to bounce between humour and tension keeps the story engaging and ensures that readers will want to come back for the finale.” – Robert Reed, AdventuresInPoorTaste.com

“The story seems to bounce around a bit. Its one thing on top of another on top of his own internal monologue. It would be great to see Walker tone it down a bit or dedicate an issue to Shaft’s back story. Dietrich’s art is great. I love the bright colors and great fashion. I don’t know much about the 1970’s, but I feel like this story and art gives a pretty good look into it.” – Amani Cooper, OutrightGeekery

“…while the story wasn’t as powerful, it did explore the search and pull for fame, and is definitely worth a read.” – Curtis Caesar John, Bold As Love Magazine, 15 August 2016

“David F. Walker and Dietrich Smith do a pretty good job with going back to John Shaft’s world, though for my money the art and story both could have been a lot rougher around the edges, faster and looser and with more swagger and style. I wonder if, by having nothing to really prove and dealing with a known property, the stakes are lowered too much. Where the film has a constant rage and fire underneath the surface, this is more of a slick, professional production. I don’t know if that serves the character best.” – Graphic Policy, 26 February 2017

“A good high-energy story, full of action – which in comics amounts to the dynamism suggested by good blocking, so the art gets a thumbs up, even if some of the anatomical studies of Shaft and others were clumsy, and not the affected clumsiness of blaxploitation art – but plain clumsy clumsiness.” – A.J. Jones, Outright Geekery, 25 July 2017

“Revisiting a foetid cesspool of civic corruption, warring mobsters and get-rich-quick chancers, this tour of a mythic milieu is another wry and intoxicating crime thriller no fan of the genre should miss…” – Win Wiacek, ComicsReview.co.uk, 10 February 2020