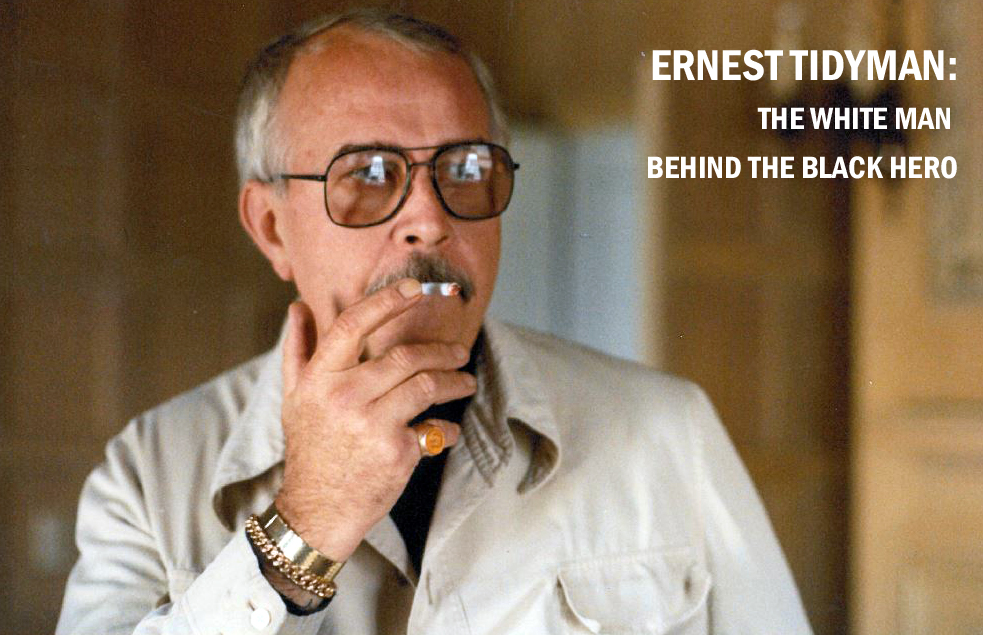 ERNEST RALPH TIDYMAN was a white American born on New Year’s Day, 1928 in Cleveland, Ohio to Benjamin Ralph Tidyman and Kathryn Tidyman. His mother was of Hungarian and his father had roots in Britain. The young Tidyman dropped out of school, aged just fourteen years, and went on to complete his studies at home under the guidance of his father – who was employed as chief police reporter at The Plain Dealer for 31 years.

Aged just fifteen and with his brother, Robert, Ernest followed in his father’s footsteps by securing a job as a police reporter for The Cleveland News after lying about his age. He was a mischievous young reporter fond of playing pranks on both the police and his fellow reporters, but it was also a job that would fuel his interest in urban crime.

On 15 April, 1946, aged eighteen years, Tidyman enlisted to serve in the military and was stationed at Fort Hayes in Columbus, Ohio (Military serial#: 45046281). His term of service was spent in public relations where he spent most of his time reading and learning his craft by putting his journalistic skills to good use.

Tidyman returned to the press as a police reporter and later a copy editor at Cleveland’s The Plain Dealer until 1956. He later progressed his journalistic career at a number of larger newspapers including The New York Post, Detroit News, Houston Post and then from 1960, The New York Times where he edited both foreign news and the women’s pages.

Tidyman’s reputation for stubbornness would lead to him later quitting the New York Times, in 1966, after he was transferred full-time to the Women’s Department without his consent. Tidyman decided to become a freelance writer, promoting articles and stories to journals and magazines (including a men’s adventure pulp magazine that produced Mario Puzo and Bruce Friedman).

It was during this period he asked a publisher about popular subjects with a view to writing a novel. He was told “hippies” were in and this led to him writing FLOWER POWER – a tale of a runaway 16-year-old girl, Phyllis Greenfield, and her introduction to sex, drugs and protest rallies. The book was published in paperback in the US on 15 March 1968 but failed to trouble the best-seller lists. Around the same time, Tidyman also had a hardback publication with the factual behind-the-scenes look at one of WWII’s bloodiest battles – THE ANZIO DEATH TRAP, which was released on 11 March 1968.

Encouraged by his literary agent, Ronald Hobbs, Tidyman took up a commission on a $1,800 advance from Macmillan mystery editor, Alan Rinzler. Rinzler had been looking to spice up the publisher’s mystery output and had been looking for something new in the field. He had the idea of creating a black detective hero in the Sam Spade/Philip Marlowe mould. After reviewing the initial pages Rinzler encouraged Tidyman to toughen up the lead character deeming Tidyman’s initial version too soft. He suggested a gesture of violence by having the hero throw a gangster out of his office window.

Tidyman completed the novel, which was titled simply SHAFT and immediately circulated galleys to contacts in the film industry. Once he had garnered interest from MGM, Tidyman was quick to see the business potential in John Shaft and set himself up to maximise his earning potential. He sold the film rights to the studio – now run by James T. Aubrey, Jr. – in April 1970. Aubrey had been brought in to sort out MGM’s financial problems and had begun to commission cheaper, more efficiently made films and SHAFT fit the bill.

Reviews for SHAFT were positive and a year later the book had sold nearly half-a-million copies. An option for a three film deal for the character was taken with MGM. Tidyman formed Shaft Productions Ltd. with producer Roger Lewis and producer/writer Stirling Silliphant with each taking a one-third cut of profits.

Film producer Phil D’Antoni had also read an early galley copy of the book and was impressed by Tidyman’s style and knowledge of New York City. As a result, in August 1969, D’Antoni invited Tidyman to adapt The French Connection from Robin Moore’s factual book about Eddie Egan, the NYC narcotics detective who uncovered a European drug smuggling ring.

In June 1971, Tidyman set up his own film production company, Ernest Tidyman Productions, based in L.A. Seeing the opportunities the success of both The French Connection and Shaft could open up for him, his long-time associate, Sylva Romano – a former Hollywood agent – was appointed vice-president.

The Shaft sequel, Shaft’s Big Score! was released in the summer of 1972 to mixed reviews. It would be the last of the movie series with Tidyman creatively involved. This left the third film, Shaft in Africa, in the hands of his partners at Shaft Productions, Lewis and Silliphant. However, Tidyman would continue the adventures of his popular hero on the written page, lining each novel up as part of a 5-year option deal with MGM.

He worked prolifically on both his book sequel to SHAFT, with SHAFT AMONG THE JEWS, and the novelisation of his screenplay to the movie sequel, SHAFT’S BIG SCORE! The books were published in quick succession, the former in hardback and the latter in paperback during the summer of 1972.

Tidyman was also looking at another media outlet for John Shaft – a comic strip. On 22 June 1972 he commissioned artist Don Rico – famous for his work for Marvel superhero comics, such as Captain America – to produce a sample portfolio of twenty-four daily strips to be touted amongst the leading New York and L.A. newspapers. Rico drew up some test panels, but Tidyman was unable to garner interest.

By 1973, Tidyman had begun to develop screenplays through his production company to ensure he got the best deal possible. He was in demand following his Academy Award and is said to have looked for help with writing screenplays on commission. During this busy period, Tidyman also had plans for four further John Shaft books including the completed The Gang’s All Here, Shaft (the latest working title for what was to become SHAFT HAS A BALL) and GOODBYE, MR. SHAFT, which would take his hero to London. These books would see Tidyman start to utilise ghost-writers (pulp writer Robert Turner and novelist/screenwriter Phillip Rock) to keep the workload up and both would be published in 1973 – the former in paperback, the latter in hardback.

The sixth John Shaft book, SHAFT’S CARNIVAL OF KILLERS, followed in paperback in the autumn of 1974. The book’s brevity was a symptom of problems with ghost-writer Robert Turner’s work on the book – at the time Turner was suffering from health and personal issues. Tidyman, therefore, had to re-write large portions of the book in order to meet Bantam’s deadline.

Tidyman’s thoughts returned to his most famous creation for one last time with the aptly named THE LAST SHAFT. He had written an outline for Rock to develop into a manuscript upon which Tidyman would later produce the final edit. The last paragraph was added to provide a literal full-stop at the end of the adventures of John Shaft. THE LAST SHAFT was published in the UK in March 1975 after Bantam declined to take publish the book in the US.

Having buried his creation, Tidyman also busied himself by developing screenplays for both the big and small screen as well as the occasional novel. He had moderate success over the last ten years of his life and was always busy.

Tidyman married for the fifth and final time on 26 March, 1982 to former Motown singer Chris Clark (born 1st February, 1946) in Los Angeles, California. They were working on a biopic of Nat King Cole before Tidyman became too ill to continue – he was a heavy smoker and drinker – and eventually died from complications of a perforated ulcer on 14 July 1984 at the age of fifty-six in Westminster Hospital, London, England. He was buried on 16 July at Washington Cemetery on the Green in Litchfield County near his Connecticut Estate.

The last word should go to his widow, Chris Clark, who when piqued by Gordon Parks omitting any mention of Tidyman when referencing Shaft in his biography, said in an article in the LA Times on 7 January 1991, “You have to admit that one could do a lot worse than having an Ernest Tidyman riding shotgun on your project.”