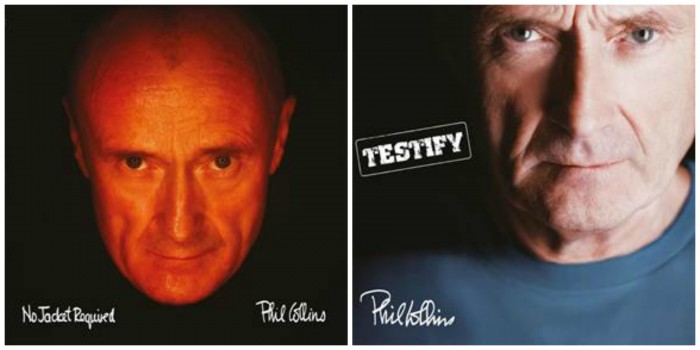 NO JACKET REQUIRED, released in 1985, was the album that launched Collins into the stratosphere. A monster hit and Grammy winner, Collins says it is the least representative of him personally. You can see what he means as he veers away from personal issues and produces a more crafted and upbeat album. From the punchy dance inspired “Sussudio” and pounding “Only You Know and I Know” to the political comment on the then situation in Northern Ireland with the evocative “Long Long Way to Go”, Collins is distancing himself from the introspection of his first two albums There is also the story of a patient escaping a mental asylum on the wonderfully anthemic “Take Me Home” – possibly Collins’ best song. It adds up to one of his strongest collections. “Inside Out” powers along to a contagious rhythm and other upbeat songs such as “Don’t Lose My Number” and “Who Said I Would” are obviously inspired by the dance/soul numbers of the day. Even a couple of his songs dwelling on personal relationships (“I Don’t Wanna Know” and “Doesn’t Anybody Stay Together Anymore”) are played at a fast tempo – the latter propelled by Collins’ heavy drums. But he still finds a place for the slow late night plea of “One More Night” and the gorgeous Beatles-like “We Said Hello Goodbye” making this album his most balanced to date. From here on Collins would dominate the airwaves both as a solo artist and with Genesis for a further seven years.

2002’s TESTIFY is (to date) Collins’ last album containing original material. It’s a much more mellow affair reflecting on an artist about to enter a state of retirement from writing to spend more time with his family. There is a warmth to a number of the songs including the reassuring “Come with Me”, the romantic lament of “This Love This Heart”, the undulating rhythms of “Swing Low” and the lullaby closer “You Touch My Heart”. There is also a cynicism apparent on the otherwise bouncy “Don’t Get Me Started”, which seems at odds with the general feel of the album. His cover of Leo Sayer’s “Can’t Stop Loving You” was the single release and maybe hinted that whilst he could still write nice songs, like the upbeat opener “Wake Up Call”, the angst-ridden title track and the throwback “The Least You Can Do”, this batch were less hook-laden than those produced in his heyday.

Both albums have again been released with recreations of the original covers and extra CDs featuring live material, B-sides and demos.