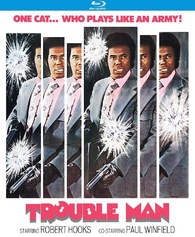 Trouble Man (1972; USA; Colour; 99m) ***  d. Ivan Dixon; w. John D. F. Black; ph. Michel Hugo; m. Marvin Gaye.  Cast: Robert Hooks, Paul Winfield, Ralph Waite, William Smithers, Paula Kelly, Julius Harris, Bill Henderson, Wayne Storm. Things begin to unravel when a supercool black fixer is hired to straighten out some crooks. Typical example of the blaxploitation cinema that dominated the early 1970s. Hooks is the supercool Mr. T, whose attitude carries more than a hint of SHAFT – on which both producer Joel Freeman and writer/exec producer Black had worked. The script is fairly routine as is the violence and mayhem, but there is a sense of style in Dixon’s direction. Gaye provides the funky score. [15]