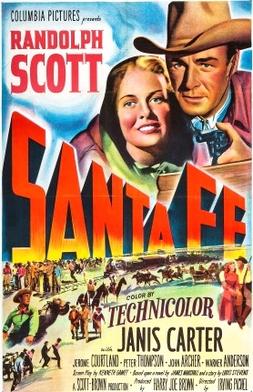 Santa Fe (1951; USA; Technicolor; 87m) ∗∗½  d. Irving Pichel; w. Kenneth Gamet, Louis Stevens; ph. Charles Lawton Jr.; m. Paul Sawtell.  Cast: Randolph Scott, Janis Carter, Jerome Courtland, Peter M. Thompson, John Archer, Warner Anderson, Roy Roberts, Billy House, Olin Howland, Allene Roberts, Jock Mahoney. After the Civil War four brothers who fought for the South head west. Yanks are building the Santa Fe Railroad and one of the brothers joins them. The other three still hold their hatred of the North and join up with those trying to stop the railroad’s completion.  Disjointed and unevenly directed western still has its moments, but it uneasily blends melodrama with comic relief. Whilst Scott is as capable as ever in the lead the film is not one of his best. Based on the novel by James Vance Marshall. [U]