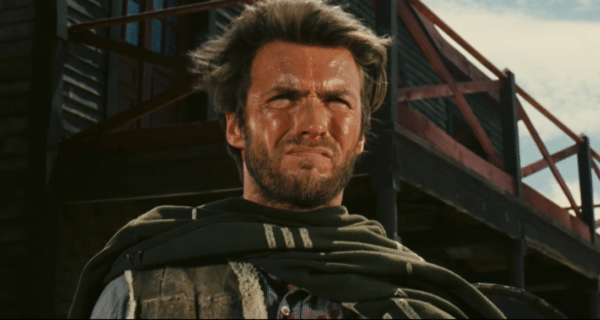 Fistful of Dollars (1964; Italy/Spain/West Germany; Technicolor; 99m) ****  d. Sergio Leone; w. Víctor Andrés Catena, Jaime Comas Gil, Sergio Leone; ph. Massimo Dallamano, Federico G. Larraya; m. Ennio Morricone.  Cast: Clint Eastwood, Mario Brega, Gian Maria Volonte, Marianne Koch, Jose Calvo, Wolfgang Lukschy, Joseph Egger, Sieghardt Rupp, Antonio Prieto, Margarita Lozano, Daniel Martin, Benito Stefanelli, Bruno Carotenuto, Aldo Sambrell. A wandering gunfighter plays two rival families against each other in a town torn apart by greed, pride, and revenge. First of Leone’s “Dollars” trilogy is relatively low-key compared to its successors, but highly influential on the genre and demonstrates his trademark style. Eastwood’s presence is immediately apparent and the story is told with economy and style. Created inertia in the production of European Westerns – branded “Spaghetti Westerns” – with their anti-heroes and stylised violence. A remake of YOJIMBO (1961), which itself was based on the as yet unadapted 1929 novel “Red Harvest” by Dashiell Hammett. Not released in the US until 1967. Original title: PER UN PUGNO DI DOLLARI. Followed by FOR A FEW DOLLARS MORE (1965) and THE GOOD, THE BAD AND THE UGLY (1966). [15]