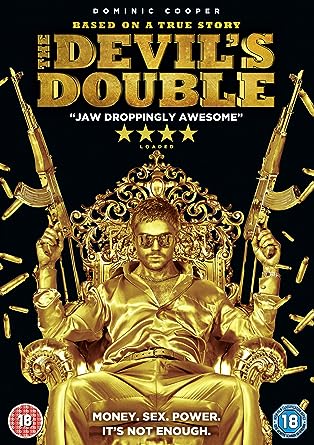 Devil’s Double, The (2011; Belgium/Netherlands; Colour; 109m) ∗∗∗½  d. Lee Tamahori; w. Michael Thomas; ph. Sam McCurdy; m. Christian Henson.  Cast: Dominic Cooper, Ludivine Sagnier, Raad Rawi, Philip Quast, Mimoun Oaïssa, Khalid Laith, Dar Salim, Mem Ferda, Nasser Memarzia, Oona Chaplin. A chilling vision of the House of Saddam Hussein comes to life through the eyes of the man who was forced to become the double of Hussein’s sadistic son, Uday. Relentlessly grim study of the Iraqi regime contains a powerful performance from Cooper. He is so good you forget he is playing both parts. The script may lack depth, but it succeeds in shocking the viewer through its graphic depiction of a crazed monster. Based on the book by Latif Yahia. [18]