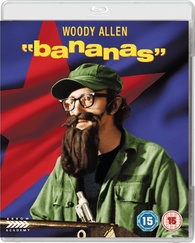 Bananas (1971; USA; Colour; 82m) ∗∗∗½  d. Woody Allen; w. Woody Allen, Mickey Rose; ph. Andrew M. Costikyan; m. Marvin Hamlisch.  Cast: Woody Allen, Louise Lasser, Carlos Montalban, Natividad Abascal, Jacobo Morales, Miguel Angel Suarez, David Ortiz, Rene Enriquez, Jack Axelrod, Howard Cosell. When a bumbling New Yorker is dumped by his activist girlfriend, he travels to a tiny Latin American nation and becomes involved in its latest rebellion. The gags come fast and furious and as many miss the mark as hit the mark, but this is still a frequently funny satire inspired by the lunacy of the Marx Brothers and silent comedians. The “sports report” bookends of the assassination and the consummation are priceless. Watch for a very young Sylvester Stallone as a hoodlum. [15]