THE HUSBANDS OF RIVER SONG
1 episode / 56m / 25 December 2015
Rating: ∗∗∗
Writer: Steven Moffat
Director: Douglas Mackinnon
Cast: Peter Capaldi (The Doctor), Alex Kingston (River Song), Matt Lucas (Nardole), Greg Davies (King Hydroflax), Rowan Polonski (Flemming), Robert Curtis (Scratch), Chris Lew Kum Hoi (Alphonse), Phillip Rhys (Ramone), Anthony Cozens (Concierge), Nicolle Smartt (Receptionist), Liam Cook (King Hydroflax’s body), Nonso Anozie (Voice of Hydroflax).
Plot: It’s Christmas Day on a remote human colony and the Doctor is hiding from Christmas Carols and Comedy Antlers. But when a crashed spaceship calls upon the Doctor for help, he finds himself recruited into River Song’s squad and hurled into a fast and frantic chase across the galaxy. King Hydroflax (Greg Davies) is furious, and his giant Robot bodyguard is out of control and coming for them all! Will Nardole (Matt Lucas) survive? And when will River Song work out who the Doctor is? All will be revealed on a starliner full of galactic super-villains and a destination the Doctor has been avoiding for a very long time. 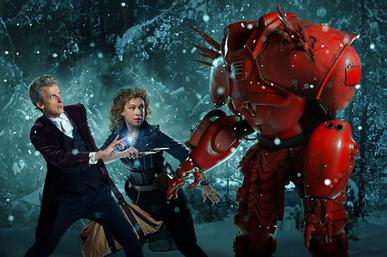 Comment: Christmas specials have been a hit-and-miss affairs over the years and this particular episode demonstrates the inconsistency perfectly. Obviously written as a fun romp with a seasonal theme it is often amusing, but seldom challenging. That is probably the point. Who wants heavy drama on Christmas Day other than fans of Eastenders? This episode, therefore, is not meant to be a serious addition to the series, merely an entertaining diversion. As such it provides contrast when compared with the majority of series 9 through the lightness of its approach. Capaldi demonstrates his true range by being as adept at comedy as he is at drama. The plot really isn’t worth scrutinising and the whole episode is merely contrived to re-introduce Alex Kingston’s River Song. Her return is welcome, but her seeming inability to recognise the new Doctor even when presented with his TARDIS seems inappropriately dim. Their scenes together, however, demonstrate a strong chemistry given the high level of association the character has with the Matt Smith era. In all this is an enjoyable, if light, addition to the annual Christmas Day outings.