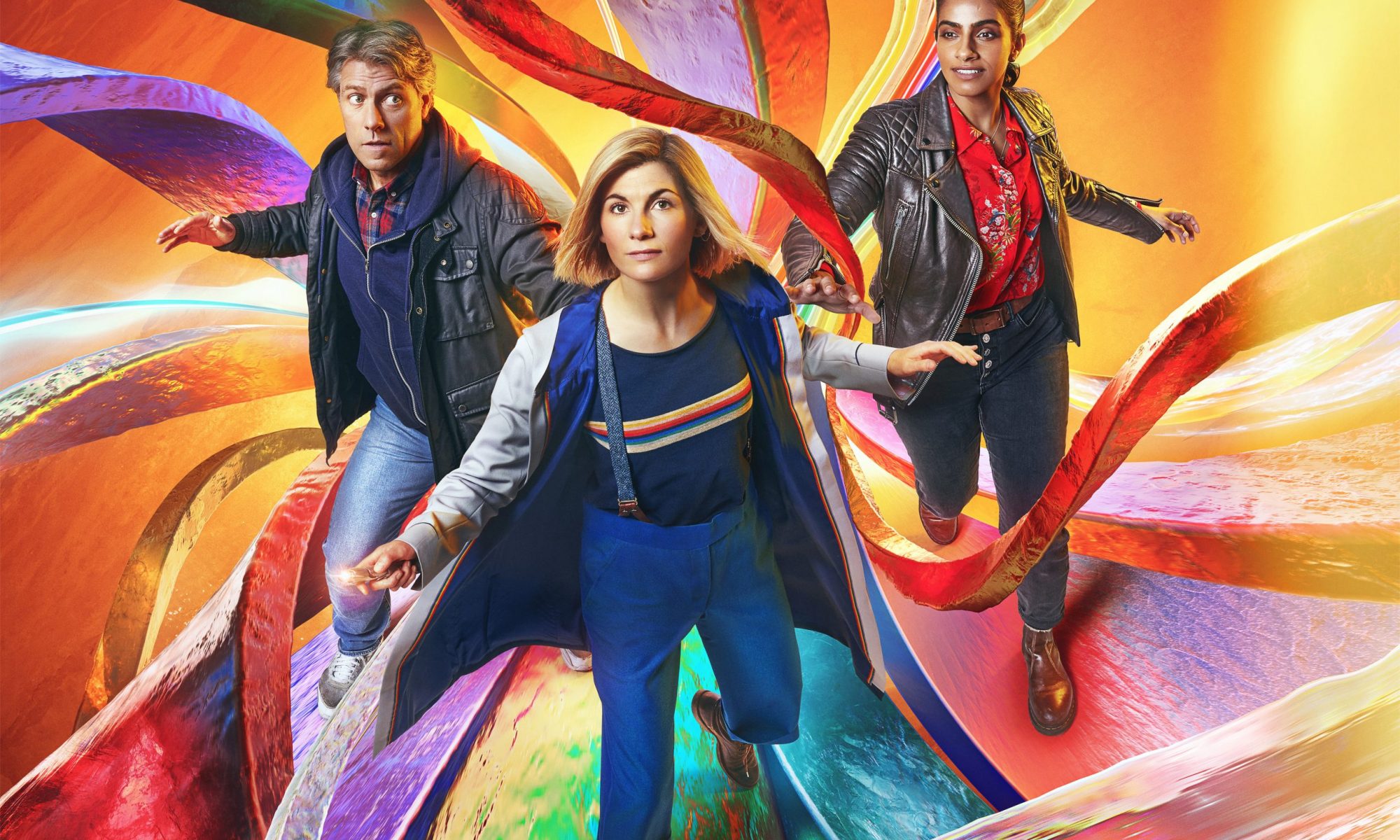 DOCTOR WHO: FLUX (2021, UK, Colour, 6 x 49-60m) ***
BBC One
Adventure, Drama, Sci-Fi
Chapters: 1. The Halloween Apocalypse ***; 2. War of the Sontarans ***; 3. Once, Upon Time **; 4. Village of the Angels *****; 5. Survivors of the Flux ***; 6. The Vanquishers **
Exec pr. Chris Chibnall, Matt Strevens; pr. Nikki Wilson (1, 2, 4), Pete Levy (3, 5, 6); w. Chris Chibnall, Maxine Alderton (4); d. Jamie Magnus Stone (1, 2, 4), Azhur Saleem (3, 5, 6); ph. Robin Whenary (1, 2, 4), Phil Wood (3, 5, 6); m. Segun Akinola; ed. William Webb, David Head; pd. Dafydd Shurmer; cos. Ray Holman.
Cast: Jodie Whittaker (The Doctor), Mandip Gill (Yasmin Khan), John Bishop (Dan Lewis), Jacob Anderson (Vinder), Craig Parkinson (Grand Serpent), Craige Els (Karvanista), Kevin McNally (Professor Jericho), Annabel Scholey (Claire Brown), Jemma Redgrave (Kate Lethbridge-Stewart), Thaddea Graham (Bel), Rochenda Sandall (Azure), Sam Spruell (Swarm), Steve Oram (Joseph Williamson), Barbara Flynn (Tecteun), Nadia Albina (Diane), Jo Martin (Fugitive Doctor), Jonathan Watson (Sontaran Commander Stenck / Skaak / Sontaran Commander Ritskaw), Dan Starkey (Svild).
Ambitious and epic in scope this thirteenth series of the revived Doctor Who was also complex, confusing and populated by too many characters. In Flux, the Doctor and her companions navigate a Universe-ending anomaly called the “Flux”, while dealing with enemies and secrets from the Doctor’s past. The story is told in six inter-linking chapters. The result is a decidedly mixed bag. The chapters that could, with some slight tweaks, serve as standalone episodes – the almost traditional “War of the Sontarans” and the deliciously creepy “Village of the Angels” (superbly directed by Stone)  – are the ones that work best. As for the rest we had the enjoyable but overly frenetic scene-setting opener “The Halloween Apocalypse”, the baffling and confusing “Once, Upon Time”, the slightly less baffling “Survivors of the Flux” and the largely unsatisfying conclusion “The Vanquishers”, which left as many unanswered questions as answered ones. The production was certainly the most extravagant ever attempted by the series – crossing various timelines on Earth and locations across (and outside) the Universe. Each of these settings was superbly realised by excellent visuals and great CGI and the series has never looked better. The technical team can hold their heads high. The lead performances were, overall, good. Whittaker has settled into her Doctor well and at times showed the gravitas that had been missing in the previous two seasons. Gill had much more to do, and Yasmin became a stronger and more pro-active character. Bishop provided some good laughs and was likeable as was Els’ dog-like Karvanista. McNally was also extremely likeable as Professor Jericho and he played the role with conviction. Parkinson’s Grand Serpent was enigmatic and the Sontarans have never looked better. The side story concerning Anderson and Graham’s characters, however, felt phoney and could easily have been excised. Where the story was really lacking, once again, was in the writing. Chibnall has had problems throughout his run in creating engaging drama and logical plots. That malaise continued here despite the additional space. Instead of letting the story breathe, he decided to fill it chock full of confusing exposition and too many peripheral characters. The best stories of the previous two seasons had been those from other writers and the best story of this series included the considerable contribution of Maxine Alderton – the others were all written by Chibnall. Playing loose with the show’s mythos through adding more back story to the Doctor with the use of Flynn (as the Doctor’s “mother”); the re-appearance of Martin as another incarnation of the Doctor; and the mysterious Swarm and Azure holding the Doctor’s memories in Gallifreyan watch. But none of this is resolved in the finale with the Doctor fractured across three timelines. Chibnall may well address these loose threads through the specials to follow, but the immediate problem is the story concluded with the big questions remaining unanswered and it asks a lot of casual viewers to stick with it. When Russell T. Davies finally takes back the reins in 2023 my biggest hope is he takes the programme back to its core roots with more straightforward and engaging plots that use temporal physics as a travelling device rather than a central plot premise. History has shown that the episodes which play with temporal themes and settings are those that tend to satisfy the least. For now, we are left with a third successive frustrating series, albeit an improvement on the previous two, and the prospect of a New Year’s special which once again will put time at the centre of its plotline.