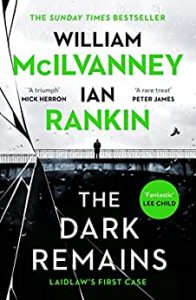 Blurb: Lawyer Bobby Carter did a lot of work for the wrong type of people. Now he’s dead and it was no accident. Besides a distraught family and a heap of powerful friends, Carter’s left behind his share of enemies. So, who dealt the fatal blow? DC Jack Laidlaw’s reputation precedes him. He’s not a team player, but he’s got a sixth sense for what’s happening on the streets. His boss chalks the violence up to the usual rivalries, but is it that simple? As two Glasgow gangs go to war, Laidlaw needs to find out who got Carter before the whole city explodes.
Comment: Ian Rankin was asked by William McIlvanney’s estate to complete work on a prequel novel the writer had commenced for his Jack Laidlaw series before his death in 2015. Rankin said, “It’s notes towards a book, a few scenes, some central characters, a sense of what the story might actually be about, but fairly incomplete.” It is therefore fair to assume that the bulk of the completed book has been shaped by Rankin using as much of McIlvanney’s material as he could. That the result is a seamless and fluid novel where it would be difficult to distinguish between each writer’s contributions is a testament to Rankin’s skills and experience. The book is a punchy mix of mystery and gangster themes and characters. At times you can hear the voice of Rankin’s own maverick cop, John Rebus, in Laidlaw – Rankin openly acknowledges McIlvanney’s influence on his own writing. The novel sets a scenario of rival Glasgow gangs in 1972 and potential double-crosses within the ranks, as Laidlaw tries to solve the murder of one of the leading gangsters’ lawyer. The characters are vividly drawn and the dialogue is excellent. Rankin has looked to mirror McIlvanney’s economical approach to prose, steering clear of long descriptive passages or too in-depth character musings. The result is a straight-ahead crime novel that serves as a perfect introduction to one of Scottish crime literature’s most influential characters.