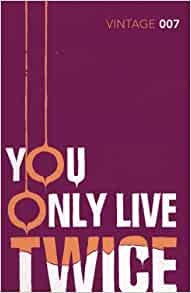 Blurb: You only live twice: Once when you are born And once when you look death in the face’ Doctor Guntram Shatterhand’s “Garden of Death” is a magnet for suicides from all over Japan. James Bond – grief-stricken and erratic – must kill him to save his career in the Service. But as Shatterhand’s true identity is revealed, Bond is forced to confront his past, in Ian Fleming’s twelfth 007 adventure.
Comment: Fleming’s twelfth Bond book was the last he fully completed before he died on 12 August 1964 (The Man With the Golden Gun was still being edited at the time of his death). The book is perhaps the darkest of all the Bond novels. Bond is initially a shadow of his former self as he continues to grieve the death of his wife, Tracy, nine months on. M is prepared to give Bond a final chance and sends him on an “almost impossible” emissary mission in order to obtain access to Japanese knowledge of US and Russian activity via their MAGIC 44 device. In return the head of the Japanese Secret Service, Tiger Tanaka, seeks Bond’s help in ridding the country of the mysterious Dr. Shatterhand, who has built a castle of death – its gardens containing poisonous vegetation and a lake filled with piranha – aimed at helping people who wish to commit an honourable suicide. Much of the book is taken in introducing Bond to Japanese customs and comparing them with those of the West. The detail of Fleming’s research is admirable, but these early sections tend to drag, despite building up excellent characterisations of both Tanaka and Bond. The book comes alive once Bond has agreed to Tanaka’s request for help and becomes a Japanese fisherman in order to gain access to the castle from the sea cliffs. The final section in Shatterhand’s lair is both tense and shocking. The grisly deaths of some of Shatterhand’s “followers” are truly harrowing.  The novel finishes in a surprising way that leaves the reader wondering where Fleming would take Bond next. Overall, this is a mixed bag, which some may find a slog initially, but the final chapters are worth it and contain Fleming’s most fantastical setting to date.