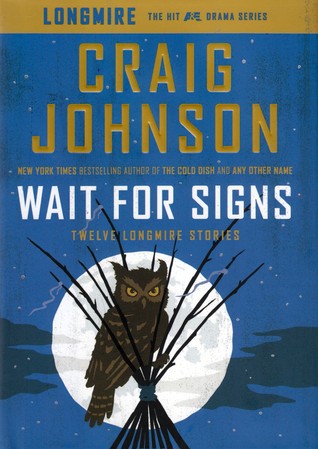 WAIT FOR SIGNS by CRAIG JOHNSON (2014, Viking/Penguin, 183pp) ∗∗∗∗
Blurb: Wait for Signs gives Longmire fans a chance to own these beloved stories—and one that was published for the first time in the Viking edition—in a single volume. With glimpses of Walt’s past from the incident in “Ministerial Aid,” when the sheriff is mistaken for a deity, to the hilarious “Messenger,” where the majority of the action takes place in a Porta-Potty, Wait for Signs is a necessary addition to any Longmire fan’s shelf and a wonderful way to introduce new readers to the fictional world of Absaroka County, Wyoming.

This collection of short stories is a wonderful sampler into the life of Craig Johnson’s Sheriff Walt Longmire. The stories were initially issued as an annual holiday gift to fans and have now been collected into this book. There are twelve in all and they range from 10 to 30 pages in length. The two stand-outs – primarily because they embody the wry and sometimes laugh-out-loud humour Johnson has peppered his novels with – are “Ministerial Aid” and “Messenger”. The former sees a desperate woman, waiting on the resurrection of the Messiah, mistake a bath-robed and unshaven Walt for the same. The latter sees Walt, his deputy Victoria Moretti and his friend Henry Standing Bear trapped in a portable toilet with a hungry bear outside and a frightened owl inside.

Johnson’s writing is as readable as ever and his skill at creating strong and likeable characters and witty dialogue are well in evidence. This is a great stop gap whilst we wait for the next novel in the series (DRY BONES, the eleventh in the series, is due out in paperback in April 2016). The Longmire series is amongst the best mystery novels out there and I recommend any curious reader to start at the beginning with THE COLD DISH (2004).

About the author: Craig Johnson is the New York Times best-selling author of eleven novels in the Walt Longmire mystery series, which has garnered popular and critical acclaim. Among other awards, THE COLD DISH was a Dilys Award finalist; THE DARK HORSE, the fifth in the series, was a Publishers Weekly Best Book of the Year; JUNKYARD DOGS won the Watson Award for a mystery novel with the best sidekick, and HELL IS EMPTY, selected by Library Journal as the Best Mystery of the Year. The series is the basis for the hit TV drama Longmire, shown on TCM in the UK and starring Robert Taylor, Lou Diamond Phillips and Katee Sackhoff. Craig Johnson lives in Ucross, Wyoming, population twenty-five.