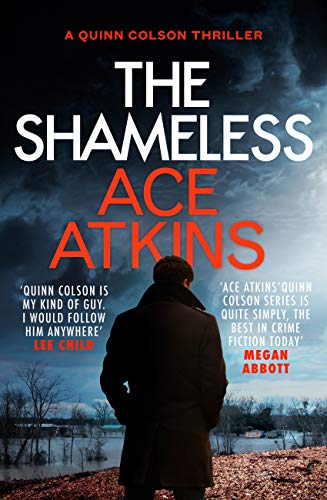 Blurb: Twenty years ago, teenager Brandon Taylor walked into the Big Woods north of Tibbehah County, Mississippi, and never returned. For former Army Ranger-turned-sheriff Quinn Colson, the Taylor case has a particular meaning. As a ten-year-old, Colson had been lost in those same woods and came back from them alive and a local legend. Years later, bones of a child are found in the woods, confirming for many the end to the Taylor story. As the case reopens, some point fingers to Quinn’s uncle, the former sheriff, who took his own life in a cloud of corruption and shame. Still, Quinn’s wife, Maggie, can’t believe it. As a childhood friend of the Taylor boy, she thinks there’s a darker conspiracy at work. Letters she receives from a mysterious inmate at a Tennessee state pen may hold the answers. With a heated election for governor on the horizon and the strengthening of a criminal syndicate’s death grip on the state, Quinn’s search for answers will upset the corruption that’s plagued his home since before he came back from Afghanistan. Greed, false piety, power, bigotry, and dirty deals make for a dangerous mix he knows all too well.
Comment: Number 9 in the Sheriff Quinn Colson series takes Ace Atkins’ hero into a cold case that hits close to home. It’s a slow-burning story, built around two New York reporters arriving in Tibbehah County to investigate what really happened to a teenager who allegedly killed himself in the woods. Again the characters are rich and the dialogue superb. Those who have been with the series from the start and seen how it has developed will consider this book a crossroads in a story arc that has built throughout, with its cliffhanger ending and some major shifts for most of the characters. What it lacks in action (a hitherto pre-requisite of the series) it makes up for in plot progression. Quinn, newly married to Maggie is up against forces that would have him removed from office, sister Caddy takes up with a man affiliated to those forces, Fannie Hathcock looks to broaden her criminal empire and battle those who would oppose her, Boom struggles with alcoholism following events from the previous book, THE SINNERS. Many of these plot threads remain unresolved by the book’s conclusion, giving it the feel of a transitionary novel with its lack of closure potentially leaving readers unfulfilled. Casual readers would, therefore, be advised to start from the beginning with THE RANGER, to get acquainted with the core characters, their back-story and the setting. They will be rewarded with a series that has matured with each book and leaves you wanting more.