THE ROCKFORD FILES: DEVIL ON MY DOORSTEP (1998) ***
by Stuart M. Kaminsky
This paperback edition published by Forge, May 2001, 304pp
First published in March 1998
© MCA Publishing Rights, 1998
Based on the Universal Television series The Rockford Files created by Roy Huggins and Stephen J. Cannell
ISBN: 0-812-57106-1 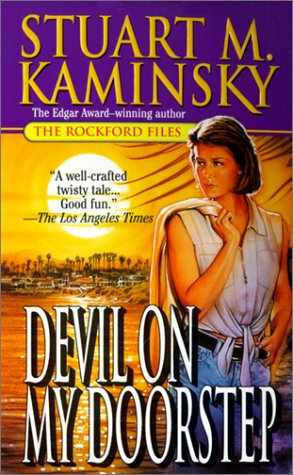 Blurb: Jim Rockford is in one hell of a mess–the credit companies are after his stuff, his buddy Angel has cooked up another scheme that is a sure thing (sure enough to get them both killed), and he’s way behind on everything. When a beautiful young girl shows up at his door claiming to be the daughter of an old flame, he’s dubious. When she claims that she’s his daughter, all the bells go off. She’s on the run, scared, and tells Jim that she thinks someone has killed her mother…and that someone is her stepfather. Whatever the outcome, Jim will do what it takes to find the truth, no matter how painful it may be. And he’ll even try not to get killed in the process.
Comment: Kaminsky delivers a thoroughly competent novel based on the popular ’70s TV show The Rockford Files, or more accurately the ’90s revival TV movies – the period in which this story is set. This is the second of two novels Kaminsky wrote featuring private eye Jim Rockford, the first being The Green Bottle in 1996. The author is obviously a connoisseur of the series and gets the characterisations of the regulars spot on. Whilst relaying the story in the first person is par for the genre, it is an interesting approach given the series was not geared that way. It gives us the opportunity to see everything that happens in this convoluted tale through Rockford’s eyes. The approach works very well in keeping the reader hooked on the mystery elements as Rockford plays off the gangsters and the Feds as he tries to discover the truth about the disappearance of an old flame and the girl who claims to be his daughter. Whilst the plot feels a little overplayed at times the writing is good and the dialogue entertaining – notably the banter between Rockford and con-man Angel. Kaminsky also introduces an eccentric assassin who quotes classic poetry. The rest of the gangster plot is standard stuff. It’s a shame Kaminsky’s series stalled after just two books – for whatever reason – as Rockford is one of the most engaging modern private eyes and the charisma of James Garner from the TV series bleeds through onto the written page.