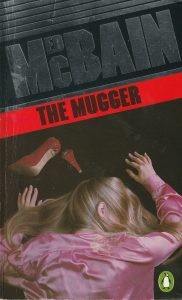 Blurb: He preys on women, waiting in the darkness…then comes from behind, attacks them, and snatches their purses. He tells them not to scream and as they’re on the ground, reeling with pain and fear, he bows and nonchalantly says, “Clifford thanks you, madam.” But when he puts one victim in the hospital and the next in the morgue, the detectives of the 87th Precinct are not amused and will stop at nothing to bring him to justice. Dashing young patrolman Bert Kling is always there to help a friend. And when a friend’s sister-in-law is the mugger’s murder victim, Bert’s personal reasons to find the maniacal killer soon become a burning obsession…and it could easily get him killed.
Comment: The second of Ed McBain’s 87th Precinct books followed hot on the heels of Cop Hater and is similarly assured. This time the detectives are investigating a series of muggings which seem to be linked to the murder of 17-year-old Jeannie Page. The pace is quick and the dialogue snappy making for a fast an entertaining read. Having focused on Steve Carella in the first book, the second is geared around detective Hal Willis, patrolman Bert Kling and decoy Eileen Burke – Carella being absent on honeymoon following his wedding at the end of the first book. This gives McBain the opportunity to expand the cast of characters within the precinct. Kling becomes the core focus as he is asked by an old friend to assist with moody sister-in-law, Jeannie, who later turns up murdered – the apparent latest victim of a serial mugger going by the name of Clifford. The two plots are resolved rather quickly and and partly through happenstance – something McBain was keen to impress on his readers was that not all cases are solved through detection alone, luck is also a key element. This sets McBain apart from many of his peers who look to impress the readers with the intellect of their detective heroes. McBain is happy to show his detectives as fallible human beings who follow a process and are as likely to make mistakes as they are to skilfully unravel the mysteries they are presented with.  McBain also explores the personal lives of his key characters – this time the focus is Kling and his burgeoning romance with student Claire Townsend. The Mugger repeats the successful formula of Cop Hater and concludes with Kling’s promotion to the detective division and Carella’s return from honeymoon. McBain was in prolific form and would produce his third 87th Precinct book to be published in the same year – The Pusher.