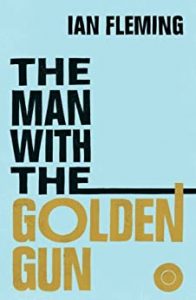 Blurb: ‘Mister, there’s something quite extra about the smell of death. Care to try it?’ After a year missing in action, Bond is back…brainwashed by the KGB and on a mission to assassinate M. To prove his worth to the Service, he must hunt down and eliminate his fiercest opponent yet: “Pistols” Scaramanga – “The Man With The Golden Gun”.
Comment: Fleming’s final full-length James Bond novel (a collection of short stories followed) was the first published after his death. Hampered by a standard Bond vs. Gangsters plot, reminiscent of Live and Let Die (both share the Jamaica setting) and Diamonds Are Forever (both deal with an organised crime syndicate), this lacks the lavish excesses of Fleming’s later work. The plot is a simple mission for Bond to target and assassinate Francisco Scaramanga, a deadly assassin for hire who uses a golden pistol. There are few surprises along the way, although the finale is reasonably exciting. Disappointing too is the swift way in which the cliffhanger we were left with at the conclusion of You Only Live Twice is resolved here. The manuscript was still in edit when Fleming died meaning further polish and potential expansion, that may have improved the book, was not possible and the result is a rough and ready Bond novel that is perhaps the weakest of the series.