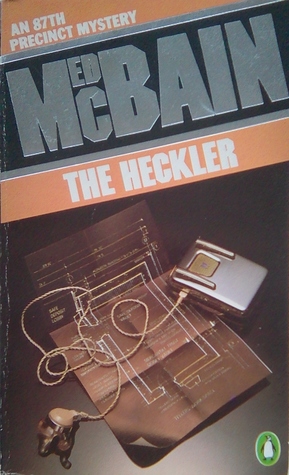 Blurb: Spring was intoxicating the city air, but the harassing anonymous telephone calls planting seeds of fear around town were no April Fool’s joke. Crank calls and crackpot threats reported to the 87th Precinct by a respected businessman were not exactly top priority for detectives Carella and Meyer — until a brutal homicide hits the papers. Connections are getting made fast and furious, and there’s a buzz in the air about the Deaf Man, a brilliant criminal mastermind. Now, the 87th Precinct is buying time to reveal the voice on the other end of the line — as the level of danger rises from a whisper to a scream….
Comment: The twelfth of Ed McBain’s 87th Precinct series introduces us to the squad’s recurring nemesis, the Deaf Man. The plot is a convoluted one of distraction and heist planned out and delivered with the utmost attention to detail by the Deaf Man and his cohorts. The detectives of the 87th, are working on what they believe to be the distinct cases of a heckler threatening shop proprietors and a murder. The Deaf Man’s scheme appears to be foolproof as the police are dispatched across the precinct in the aftermath of a wave of bombings and arson distracting them from the gang’s real plans. The plot unfolds in customary McBain fashion showing our detectives to be both human and vulnerable. The dialogue sparkles as ever and the prose has the familiarity of a storyteller at the top of his game. The resolution relies on irony, happenstance and remains open-ended. Another strong entry in the series.