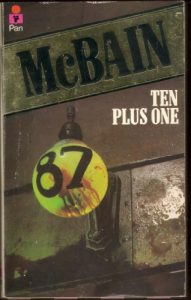 Blurb: When Anthony Forrest walked out of the office building, the only thoughts on his mind were of an impending birthday and a meeting with his wife for dinner. And a deadly bullet saw to it that they were the last thoughts on his mind. The problem for Detectives Steve Carella and Meyer Meyer of the 87th Precinct is that Forrest isn’t alone. An anonymous sniper is unofficially holding the city hostage, frustrating the police as one by one the denizens of Isola drop like flies. With fear gripping the citizenry and the pressure on the 87th mounting, finding a killer whose victims are random is the greatest challenge the detectives have ever faced—and the deadliest game the city has ever known.
Comment: The seventeenth book in Ed McBain’s 87th Precinct is amongst his best work to date. There is confidence evident in the writing that confirms McBain was in total command of his craft. The dialogue is the sharpest and wittiest to date – Monoghan and Monroe at the first crime scene are priceless – and all the characters are well-drawn and feel real. There is also a broadening of the scope as other precincts are brought into the story and the book is also the longest to date. The plot is a familiar one with a group of estranged people linked by a historic event who find themselves being killed one by one. As the suspect list narrows and the net closes on the killer, the tension builds. McBain paces the book perfectly to produce a gem.