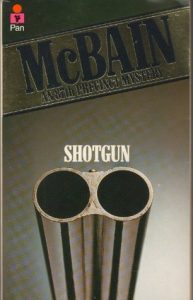 Blurb: A psycho has butchered a nice young couple and he’s loose somewhere in the 87th Precinct. He has a name, an address and an identity. Walter Damascus is a third-rate lothario who likes his women well off, well built and dead, along with their husbands. Sooner or later he will surface.
Comment: The 23rd book in Ed McBain’s 87th Precinct series sees the series return to a more serious tone with a particularly nasty double murder opening the book. McBain weaves in many other elements, including tieing up loose ends from an earlier book (He Who Hestitates), so much so that he frequently leaves the main plot to do so. The investigation, therefore, progresses procedurally without fully capturing our attention. Intermingled are domestic asides – Carella’s family celebrating Halloween and Kling’s fragile relationship with Cindy Forrest – and a third murder, seemingly unrelated to the main plot. As ever, McBain brings the story threads together in a clever finale, but as a whole, the book feels a little piecemeal.