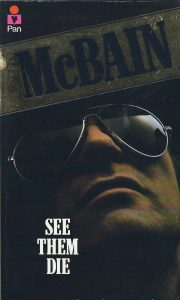 Blurb: Kill me if you can – that was Pepe Miranda’s challenge. Murderer, two-bit hero of the street gangs, he was holed up somewhere in the 87th Precinct, making the cops look like fools and cheered on by every neighbourhood punk. It was not a challenge Lieutenant Pete Byrnes and the detectives in the squad room could leave alone. Not in the sticky, July heat of the city with the gangs just waiting to explode into violence . . .
Comment: The thirteenth of Ed McBain’s 87th Precinct series once more sees McBain trying out a new approach. McBain concentrates less on plot/detection and more on social comment, in this story of a Puerto Rican criminal under siege in his own community from the cops of the 87th Precinct. Alongside this McBain delves into issues of inter-gang warfare and the bravado of youth in the immigrant community alongside and the racial attitudes of the cops (juxtapositioned by the racist slob Andy Parker and the Puerto Rican Frankie Hernandez) and those who live in the community itself. As such the story unfolds in the style of a three-act play. The result is a patchy novel that only comes to life in its nail-biting final act.