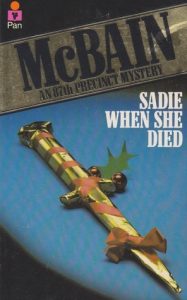 Blurb: Christmas is coming. But erudite attorney Gerry Fletcher got his present early: his wife’s body with a knife buried in it. Though he shamelessly cops to being happy she’s dead, his alibi is airtight and all signs point to a burglary gone bad. But even when detectives Steve Carella and Bert Kling follow the clues to a junky punk and get a full confession, Carella can’t quit thinking there’s something about the case that’s as phoney as a sidewalk Santa’s beard. Maybe it’s because the victim’s husband wants to pal around with the suspicious cop on a cryptic pub crawl through the urban jungle. Or maybe it’s the dead woman’s double identity and little black book full of secret lovers. Whether she was Sarah the shrewish wife or Sadie the sex-crazy swinger, there’s more to her murder than just a bad case of wrong place, wrong time. And Carella won’t rest till his cuffs are on the killer.
Comment: The 26th book in the 87th Precinct series by Ed McBain is one of the strongest. McBain skillfully navigates us through Carella’s dogged investigation of Fletcher by creating a relationship between the two similar to the formula used in the Columbo TV series (for which McBain would later adapt a couple of his novels). This is again another experiment in format for McBain, but here he is much more successful. A subplot involves Kling and his relationship with the mysterious Nora Simonov, which lands him in more trouble than he has bargained for. As would become an increasingly used formula, the two plots have no link, merely show McBain’s broader cast of characters in their ongoing domestic and work lives. As Carella closes in on Fletcher, the attorney becomes increasingly paranoid and the plot is neatly brought to a satisfying conclusion as Carella’s stakeout unearths the secrets of Fletcher’s marriage.