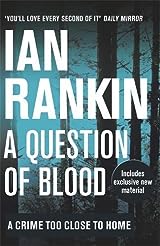 Blurb: Two seventeen-year-olds are killed by an ex-Army loner who has gone off the rails. The mystery takes Rebus into the heart of a shattered community. Ex-Army himself, Rebus becomes fascinated by the killer, and finds he is not alone. Army investigators are on the scene, and won’t be shaken off. The killer had friends and enemies to spare and left behind a legacy of secrets and lies. Rebus has more than his share of personal problems, too. He’s fresh out of hospital, but won’t say how it happened. Could there be a connection with a house-fire and the unfortunate death of a petty criminal who had been harassing Rebus’s colleague Siobhan Clarke?

This was the fourteenth book in Ian Rankin’s perpetually popular Inspector Rebus series. The subject matter resonates strongly in light of recent instances of campus shootings in the US. Rankin uses the plot to tackle a number of themes including some of his favourites – single-minded politicians, government cover-ups, changes in modern society, families. He also explores the trust in the relationship between Rebus and his DS Siobhan Clarke by having Rebus suspected of killing a low-life who had been stalking Clarke. The main plot is presented as a “why-dunnit” as Rebus is called in by a colleague due to his military background to help with the investigation of a multiple shooting at a public school. The various plot strands and themes unfold and ultimately begin to intermingle and connect. Rankin’s skill as a writer ensures these progressions feel natural connections rather than contrivances. Only in the finale does the plot seem forced.

By now, Rankin is totally at home with his characters and Rebus remains a fascinating creation – a loner, yes, but one who’s affection for Clarke is seen as a surrogate for the daughter he no longer sees. Whilst there would be just three more books in the series’ initial run which ended in 2007, that Rankin returned to the character five years later and restarted the series is testament to the affection he holds for Rebus.