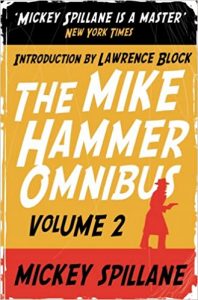 Blurb: Nobody ever walked across the bridge at night. But on the foggy night that Hammer took that chance, his encounter with a gun-toting thug and a girl on the lam ended with both strangers dead. Soon Hammer is caught in a web of sinister gangsters and beautiful women the likes of which he’s never seen — and his only way out is to kill and kill again…even with his bare hands.
Comment: The Mike Hammer novels of Mickey Spillane had a rough ride from critics in their time. Spillane’s hero’s two-fisted approach to detection and a high personal body count did not go down well with those favouring the more cynical but honourable detectives created by Hammett, Chandler and Macdonald. Underneath Spillane’s seemingly two-dimensional approach lies a more thoughtful portrayal of a character tortured by his wartime experiences and channelling his anger and aggression at those who he feels deserve to be punished. This thirst for vengeance, revenge and justice was very clearly played out in Spillane’s first three Hammer books – I, the Jury, My Gun is Quick and Vengeance is Mine! In this fourth book, we see Hammer questioning his own methods after he is chastised by a judge – as if Spillane had a desire to set the scene in order to state the case for his hero. The book then seeks to do this by offering up a group of Communists as the villains and likening them to the Nazis. These villains have no redeeming qualities and Hammer’s disposal of them throughout the book is served up as the only way the spread of their menace can be stopped. As such the book is very much of its time. A time when the post-WWII US was in a state of paranoia about the infiltration of “Commies” into its society. Spillane allows Hammer several moments of introspection, where he questions his motives and methods. Then the kidnapping of his secretary and love, Velda, is the spark that sends Hammer on a rescue mission armed with a machine gun and pistol. There are mystery elements weaved in – the main one surrounding a politician and his mentally disturbed twin brother. Spillane’s books are never subtle, but here it appears the author has gone to an extreme in order to justify his approach and as such the book feels more forced than the previous two novels. As such it is one of the lesser books in the Spillane library.