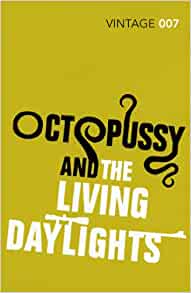 Blurb: ‘This was going to be bad news, dirty work. This was to be murder’. Four classic moments in the life of a spy. From avenging the wartime murder of a friend to sniper duty on the East-West Berlin border, James Bond’s body, mind and spirit are tested to their limits.
Comment: This is the fourteenth and last of Ian Fleming’s James Bond books to be published, and the second posthumously. The book collects four short stories of varying quality. The two weaker stories – “Property of a Lady” and “007 in New York” were commissioned pieces of work. The former by auction house Sotheby’s for their journal The Ivory Hammer and the latter for the New York Herald Tribune newspaper. Neither story has anything of real interest. “007 in New York” is a brief episode describing Bond’s arrival in the city to warn a former British agent that her boyfriend works for the opposition. Its only claim is the written recipe of Scrambled Eggs James Bond. “Property of a Lady” describes Russian underhandedness at an auction of Faberge jewellery. The story has little to offer, other than some insight into auction etiquette. “Octopussy”, originally published posthumously in the Daily Express, is an interesting story of honour with Bond having tracked down Colonel Dexter-Smythe, who, following WWII, murdered a guide in the Swiss mountains as he tracked down some Nazi gold bullion. The guide also happened to be Bond’s former ski instructor from his youth. Bond allows Dexter-Smyth the honourable way out. The story is well written blending the flashback of the discovery of the gold with the present in which Dexter-Smythe is a sad recluse. There is a neat resolution as Dexter-Smythe, awaiting his eventual arrest, is stung by a scorpion fish and devoured by his own pet octopus. Was it accident or suicide? The best of the bunch is “The Living Daylights”, written for The Sunday Times colour supplement. It is set in Berlin where Bond is on a mission to assassinate a sniper out to shoot a defector as he attempts from East to West. When Bond realises the sniper is a woman he spares her life, but destroys her weapon allowing the defector to make his escape. Bond is chastised by his fellow agent for disobeying orders and putting the mission at risk. The story is excitingly written and just the right length. Bond sticks to his principles and we get to better understand how his attitude toward his job. So, a mixed bag, but still much to enjoy.