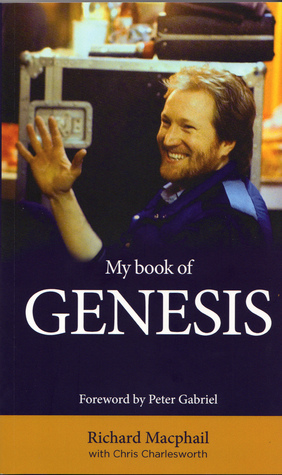 Blurb: School friend, aide-de-camp and tour manager, Richard Macphail was for almost five years the glue that held Genesis together, and in his affectionate memoir My Book of Genesis he tells his own unique story of the group’s early years. Richard was the singer in Anon, the Charterhouse school group that included Mike Rutherford and Anthony Phillips, which would later merge with Peter Gabriel and Tony Banks’ group The Garden Wall to become Genesis. Richard then became their one-man road crew, shepherding them from gig to gig, providing a cottage where they could live and rehearse and offering support when it was most needed. Richard was there when Phil Collins was auditioned, when Steve Hackett was recruited to replace Anthony Phillips and when Peter Gabriel left for a solo career. He was in the thick of it as they fulfilled their ambitions, signing to Charisma, touring Europe and America and recording a series of albums that fans fondly remember as the bedrock of Genesis’ extraordinary career. In his book’s final chapters he describes his ongoing relationship with Peter, Mike, Tony, Phil and Steve, a friendship that has endured for over 50 years. Featuring contributions from all the members of Genesis and co-written with former Melody Maker journalist Chris Charlesworth, My Book Of Genesis is both revealing and forthright, an insider’s account that fans will treasure.

An interesting account of the rise of a rock group in the days when bands had to work for their success. Some lovely stories and anecdotes of the author’s time with Genesis, from their beginnings at Charterhouse through to them cementing their prog-rock status in 1973 with “Selling England by the Pound”. Macphail was the unsung hero and his enthusiasm and encouragement helped to see the band through some early setbacks. He was the band’s champion, driver, technician, sound engineer, road manager and cook through their formative years and all the band contribute to his story, confirming their gratitude toward a free spirit who they saw as a sixth member.