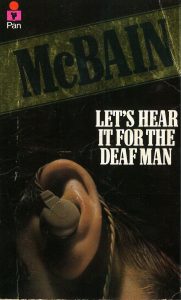 Blurb: “You’ll have to speak a little louder,” the voice said. “I m a little hard of hearing.” Between a highly successful cat burglar and a hippie crucifixion, the 87th Precinct definitely doesn’t need the Deaf Man showing up again especially since his two previous appearances resulted in blackmail, murder, and general havoc. But at least they have him now…unless he had them first. The Deaf Man can hardly contain his glee. Detective Steve Carella is about to inadvertently help him rob a bank. Each day, he mails Carella a picture to keep the game going. The first two are pictures of J. Edgar Hoover, while the next ones involve George Washington. All are clues, obviously. But how do they add up? And will the 87th Precinct find out before the Deaf Man has the last laugh?
Comment: The Deaf Man, last seen in 1968’s Fuzz, returns for this the 27th book in McBain’s prolific 87th Precinct series. It would appear that McBain was looking to cash in on the movie adaptation of Fuzz, released the previous year. This time the Deaf Man’s scheme returns to his roots from 1960’s The Heckler, by his attempts to tease and wrongfoot the detectives, and in particular Carella, whilst planning a bank heist. As was becoming a regular approach, McBain weaves in two other unrelated plots: the first concerning apartment burglaries, where the perpetrator leaves a kitten as a calling card; the second featuring a murder in the form of crucifixion. McBain’s strengths in dialogue and plotting remain evident throughout, but the Deaf Man’s scheme feels a little boiled over by repeating that seen in his 1960 debut. This book takes a straighter approach than that seen in Fuzz, and the squad are presented as more competent. On the domestic front, we get to meet Kling’s new love in model Augusta Blair. Their romance feels a little rushed as it competes with the trio of plots. Nevertheless, this is another enjoyable read.