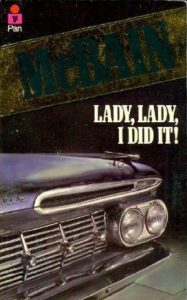 Blurb: The first thing Detectives Steve Carella and Bert Kling saw was four bodies soaked in blood. Then Kling realized that one of those crumpled on the bookshop floor was Claire Townsend, his fiancee! And that’s when the bookstore massacre stopped being just another murder case to the boys of the 87th Precinct. For Bert Kling was one of their own, and no one could get away with blasting a policeman’s girl.
Comment: The fourteenth of Ed McBain’s 87th Precinct novels brings the act of murder close to home when Kling’s fiancee Claire Townsend, a recurring character since The Mugger (the second in the series), is killed with three others in a bookstore shooting. McBain handles the detective’s emotional state well as he juggles grief with anger. The mystery elements also work well here and keep the reader guessing through to the book’s conclusion. McBain’s style is in evidence with witty and naturalistic dialogue, punctuated with metaphoric descriptions of city life. One of the best of the early books.