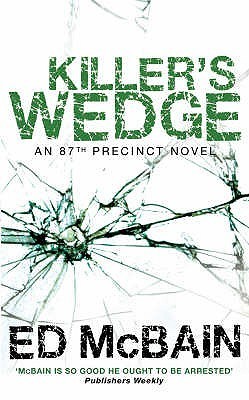 Blurb: Her game was death – and her name was Virginia Dodge. She was out to put a bullet through Steve Carella’s brain, and she didn’t care if she has to kill all the boys in the 87th Precinct to do it. So Virginia, armed with gun and bottle of nitro-glycerine, spent a quiet afternoon in the precinct house, terrorizing Lieutenant Byrnes and his detectives with her clever little homemade bomb. They all sat there waiting for Steve Carella. Could all the men of the 87th, prisoners of one crazy broad, be powerless to save Carella from his rendezvous with death…?
Comment: This is the seventh of Ed McBain’s 87th Precinct novels and here he takes a different approach by making the main plot a tense thriller and the sub-plot a mystery. The revenge plot in which Virginia Dodge holds the 87th squad captive at gunpoint with a jar of nitro is extremely well written by McBain as the tension escalates. He uses third person and first person perspectives to heighten the tension and frame the varying viewpoints of the characters. Meanwhile, Virginia’s intended target, Steve Carella, is investigating the death of a wealthy socialite found hanged in a locked room. The latter sub-plot follows a very traditional mystery path and is merely a supporting function to the main story. Suspense is heightened when Carella’s wife, Teddy, arrives at the squad room only to be confronted by the siege. A successful diversion for the series continuing McBain’s impressive run.