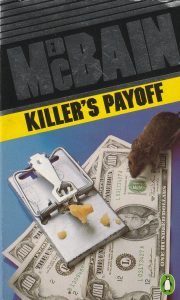 Blurb: He appeared to be a decent, upright, honest citizen….And yet appearances can be more than deceiving in the world of blackmail and extortion. The shocking gangland-style murder of known blackmailer Sy Kramer begs the question: which of Kramer’s marks had given him his very last payoff? A politician’s beautiful wife with a deadly secret? An overly interested ex-con? A wealthy soft-drinks executive? Or the mystery person who had fattened Kramer’s wallet by the thousands? The detectives of the 87th Precinct must break the chain that links the dead man’s associates and single out a killer — before someone else cashes it in.
Comment: This is the sixth of Ed McBain’s 87th Precinct books and it is clear that the author has found his rhythm. This is a tight mystery that introduces a wide range of characters as murder suspects – the victim being a dislikeable extortionist. Steve Carella and Cotton Hawes take the lead in the investigation and McBain has fun developing Hawes’ character – making him something of a lothario. The dialogue is as snappy as ever and the investigation moves along in a logical and procedural fashion. However it is instinct that leads to a resolution, demonstrating the need for human proactivity. Another highly enjoyable read in this influential series.