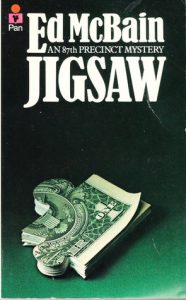 Blurb: Every day the men of the 87th Precinct solve puzzles. Of lives interrupted, lives intertwined and lives gone wrong on the streets of the city where they work. Sometimes the clues come easy. Sometimes they come covered in blood… Six years ago four men robbed a bank. Then a shootout left them dead, and 750 grand missing. Now Detectives Carella and Brown are finding pieces of a photograph, each piece tied to a name, each name tied to a murder, each murder tied to the bank robbery six years ago. The 87th Precinct cops know that the complete picture will lead them to the money. They just don’t know how many people still have to die — before the last piece falls into place.
Comment: The 24th book in Ed McBain’s 87th Precinct series is a literal puzzle as the detectives look to piece together a photograph to discover where $750,000 in stolen loot is buried and to solve some murders along the way. Here, McBain follows a mainly traditional format, but spices the story with elements of racial tension as Arthur Brown becomes the lead detective on the case. The solution is achieved through Brown’s acted physical intimidation of a southern girl who has become embroiled in the plot, but along the way we see him deal with society’s prejudices with mixed emotions. McBain’s writing is as assured as ever, but you can feel him reaching to add something new to the series and this case enables his characters to adapt their approach accordingly. A solid entry in the series.