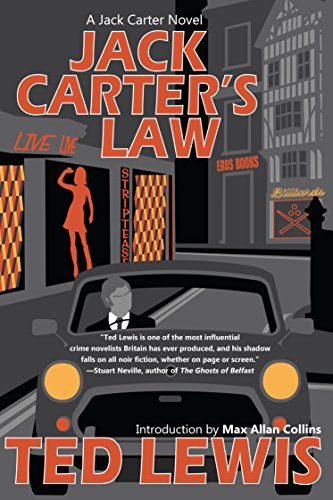 Blurb: It’s the late 1960s in London and Jack Carter is the top man in a crime syndicate headed by two brothers—Gerald and Les Fletcher. He’s also a worried man. The fact that he’s sleeping with Gerald’s wife, Audrey, and that they plan on someday running away together with a lot of the brothers’ money, doesn’t have Jack concerned. Instead it’s an informant—one of his own men—that has him losing sleep. The grass has enough knowledge about the firm to not only bring down Gerald and Les but Jack as well. Jack doesn’t like his name in the mouth of that sort. It should be an easily solved problem for London’s suavest fixer, except for one slight problem: Jack has no idea where the grass is hiding.

Jack Carter’s Law is Ted Lewis’ follow-up to his highly influential Jack’s Return Home, which was filmed as, and later retitled, Get Carter. This second book in the series is set prior to the first. Whereas Jack’s Return Home gave Lewis’ anti-hero a personal vendetta as motivation for the ensuing mayhem, here Carter is acting in his role as fixer/enforcer for one of London’s biggest criminal gangs. As such, there is little for the reader to root for in a cast of characters that have few, if any, redeeming qualities. That said, Lewis masterfully keeps you engaged through his first-person perspective. Written in the present tense, not a popular style but effective here, the action feels immediate and the tension is kept high. Lewis also has a penchant for long descriptive paragrpahs, punctuated by salty and humorous dialogue. The book is not for the faint-hearted – there are several moments of brutality and cruelty – but for fans of gritty pulp fiction this is a great example of the genre. Lewis became something of a cult figure in the world of gritty crime fiction and unfortunately died young (aged only 42) after a battle with alcoholism.