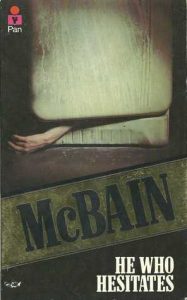 Blurb: Outside the 87th Precinct a stranger stands in the falling snow. A big man with big hands, Roger hesitates: He knows he should go in and tell a policeman about what happened the night before; about Molly, the homely girl he met in a bar and brought back to his rented room. But then again… The snow falls on the city. Pushers, pimps, and working stiffs come and go. Roger tries to make up his mind. And every second that he hesitates takes him one step farther away from the 87th Precinct station, as another second ticks away on an innocent woman’s life…
Comment: The 19th book in Ed McBain’s 87th Precinct is an interesting diversion for the series after the stale Axe. Here McBain tackles the psychological ambiguities inherent in Roger Broome, a salesman who lives with his mother and struggles to control his homicidal impulses. Although written in the third person, the story is told solely from Roger’s point of view and we only see the detectives through his eyes as he contemplates turning himself in. As a change of direction, albeit temporary, this novel maintains interest throughout and some tension is built when Roger finds Amelia, who he falls in love with. The will-he or won’t-he kill her conundrum gives the story its impetus as Roger restrains his impulses and pushes himself to own up to the murder of Molly, a girl he met in a bar. McBain would return to his procedural approach for his next book, Doll.