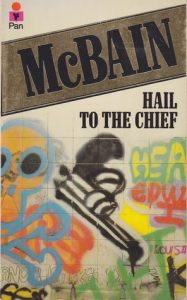 Blurb: Carella looked in the frozen ditch. Kling fanned his flashlight over the naked bodies. Who was responsible – Death’s Heads, Scarlet Avengers or the Yankee Rebels? A couple of detectives with six corpses on their hands needed all the help they could get. They wouldn’t get it from the gangs, that was for sure. Those guys didn’t fool around. You were either their friends or you were their enemies. All hell was set to break loose…
Comment: Book number 28 in McBain’s 87th Precinct series is another departure from format. This time McBain interweaves the police investigation with the statement of the key perpetrator as Carella and Kling move between the three key gangs whilst trying to solve a multiple murder. The problem here is that we cannot really invest in these gangland characters. This is a similar problem to that encountered in McBain’s earlier attempt to tackle youth gangs in his 1960 novel, See Them Die – although there he had a better framework with which to add some social commentary and colourful characters. The fact that the mystery element is all but removed from this novel turns it into more of an examination of gang culture as a metaphor for national, international and cultural conflict. That it also feels manufactured shows how much the subject is outside of McBain’s comfort zone. His strengths have always been in plot development, character and dialogue and here these qualities are less evident. As a result, this book is one of his least successful efforts.