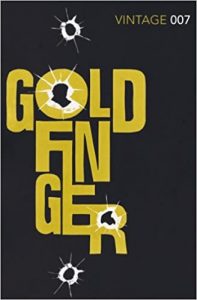 Blurb: ‘You’re stale, tired of having to be tough. You want a change. You’ve seen too much death’. In Fleming’s seventh 007 novel, a private assignment sets Bond on the trail of an enigmatic criminal mastermind – Auric Goldfinger. But greed and power have created a deadly opponent who will stop at nothing to get what he wants.

Comment: Fleming’s seventh James Bond novel is his most ambitious plot to date, based around chief villain Auric Goldfinger’s plan to rob the Fort Knox gold depository, which occupies the final section of the book. The novel opens with Bond being asked by a friend to spot how Goldfinger is cheating him at cards. Bond succeeds and embarrasses Goldfinger into handing back his winnings. The pair meet again on the golf course, this time by design as Bond has been asked to investigate how Goldfinger is obtaining his massive wealth. The golf match is well described with Bond again getting the upper hand as Goldfinger fails in his attempt to win back some of his prior losses. Bond then follows Goldfinger across Europe to his factory, where he discovers how Goldfinger is smuggling his gold around the world. Having been discovered, Goldfinger, seemingly out of ego, keeps Bond onside as part of his Operation Grand Slam, the most daring robbery ever plotted. Along the way Bond meets Tilly Masterton, looking to avenge the death of her sister Jill at Goldfinger’s hands and the daringly named Pussy Galore, a lesbian gangster who is invested in Goldfinger’s operation. We also meet Oddjob, the giant Korean henchman with a deadly hat. Fleming’s writing is fluid and there is more of a cynical humour on show. The plot is frankly highly implausible and the final section of the book, whilst picking up the pace considerably, defies belief, whilst remaining wildly entertaining. However, it is hard to accept the logistics of Goldfinger’s plan and more so the way in which it is thwatrted. Goldfinger continues the trend set in Dr. No of Fleming using increasingly fantastical plots and the book feels a light year away from the honed down tension and emotion of Casino Royale.