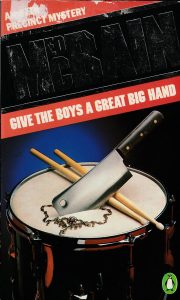 Blurb: The mystery man wore black, and he was a real cut-up king. Why else was he leaving blood-red severed hands all over the city? Was he an everyday maniac with a meat cleaver, or did he have a special grudge against the 87th Precinct? Steve Carella and Cotton Hawes went along with the grudge theory because the black-cloaked killer didn’t leave any clues to go on – the grisly hands even had the fingertips sliced off. And how do you nail a murderer when you can’t identify or unearth most of his victims? That’s what the boys of the 87th Precinct have to do: find a killer before he carves up any more corpseless hands!
Comment: The eleventh of Ed McBain’s 87th Precinct series is an efficient and neatly plotted mystery, which finds McBain moving back to the series’ core procedural format after a couple of diversions. The detectives have to find the identity of a corpse from just a pair of severed hands. McBain takes us through the investigation via his trademark engaging prose and witty dialogue. Whilst the story does not veer from the formula that made the series so successful, it remains an engaging read in the hands of a master storyteller. McBain effectively builds the tension in the finale by intercutting scenes as two leads converge into one a climax that is both shocking and satisfying.